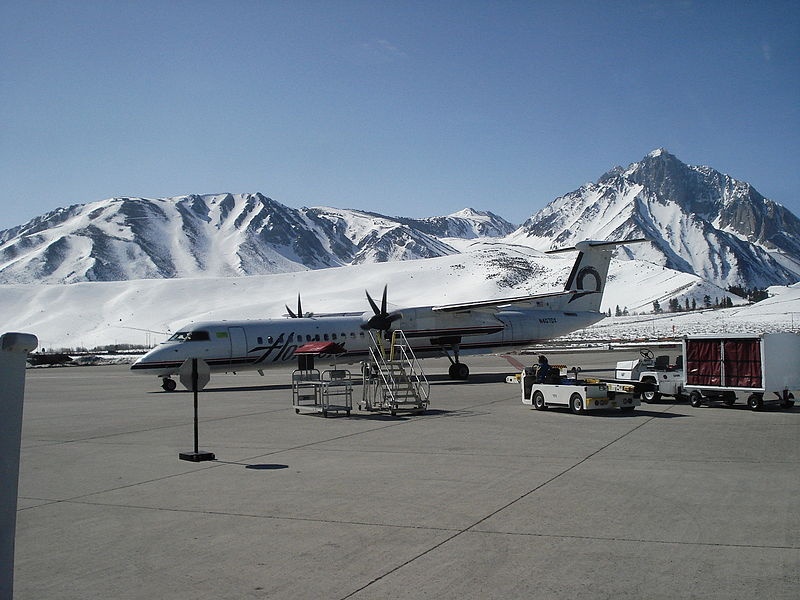 Mammoth Lakes, CA – Thank you to my dear friend and Georgetown Law grad Hayley Neal for bringing this story in last week’s New York Times to my attention. According to the article, visitors to Mammoth Lakes, Calif.’s famous mineral springs may not be the only ones in hot water.

The town of Mammoth Lakes – home of Mammoth Mountain ski area – is headed towards bankruptcy. It seems the trouble began back in 1997 when the town made a deal with a developer in which the town agreed to make improvements to the local airport (Mammoth Yosemite: MMH) in exchange for the development rights to a nearby property. Difficulties ensued when the FAA raised concerns about the town’s proposed improvements and the town subsequently abandoned airport expansion plans. The developer sued the municipality for breach of  contract and won a $30 million judgment, which with interest now stands at $43 million.

California law has an odd quirk which requires any municipality that wishes to declare bankruptcy first to attempt mediation. The parties are set to begin that process shortly. If the mediation proves unsuccessful – as will most likely be the case – the town will be left with little option besides declaring bankruptcy.

The Times piece paints this outcome as unfair to the municipality. The adoption of such a perspective shows a lack of nuance by the author and a definite lack of knowledge of the ski industry. I have a far different take on the situation.

What the Times article completely neglects to mention is that Mammoth Mountain is notoriously inaccessible. In fact, in my opinion, it is the single most difficult major resort in the United States to access. Despite being renowned for outstanding terrain, deep snow and one of the longest seasons anywhere in the world, relatively few skiers from outside of California visit the resort. The only way to get there is from Mammoth’s tiny airport (the same one the town promised to improve in its agreement with the developer) or a lengthy drive from Los Angeles, San Fransisco, Reno, or Las Vegas. On dry roads and without traffic, the drive time from L.A. or San Fransisco is six hours. Consider that the region receives over 400 inches of snow a year and L.A. and San Fransisco aren’t exactly known for traffic-free highways and you get the picture.

Mammoth’s little airport is the lifeblood of region. And when we say little, we mean little. The airport is served by only two airlines (United and Horizon Air/Alaska Airlines) which offer only a handful of short-haul destinations in winter and only one in summer. All flights are on small propeller aircraft. Chicago O’Hare it is not.

Ask yourself this question: If you were a developer considering investing tens of millions of dollars on a project in a region that already had a sizable bed-base, would you do it? Without an improvement to the infrequent air service which could increase capacity, there was no foreseeable increase in the number of visitors to the region.

The people of Mammoth Lakes have a right to be angry, but the anger should be directed at their own officials who lacked the wherewithal to navigate the approval process necessary to improve the airport. The project should have been a “win-win.” A better airport would have  meant more visitors, along with easier and cheaper airfare for residents and visitors alike. Just ask the folks who live near Vail-Eagle (Colo.) or Jackson Hole (Wyo.) airports whether their expanded airport facilities have boosted the local economies. Enplanements have risen steadily at both airports as both regions have invested in major improvements to accommodate larger aircraft and increased traffic. Jackson Hole forecasts almost a 50% growth in passenger traffic by 2028, thanks in no small part to their expanded and improved airport facilities.

Airport improvements aside, from a contract drafting standpoint should the town have made the deal contingent on FAA approvals? Absolutely. Not to do so was likely a mistake, but it also may have been the only way to incentivize the developer to construct the project. Doubtless, the town was eager to cash in on its share of the incredible resort development boom of the ’90s and early 2000s. In this case, that eagerness may have led to the town to take some shortcuts. There is risk inherent in any deal, but it’s important to remember that if and when the town declares bankruptcy, it is the developer (along, of course, with the citizens) who ends up on the short end of the stick. When two parties enter into a transaction they have a right to expect the other side to keep its promises. When they do not, that’s why we have courts. Mammoth Lakes will not and should not receive a pass merely because it is a municipal entity.

Anger can be a good thing, particularly when it is channeled into the political process. If the people of Mammoth Lakes want to hold someone accountable for their current financial nightmare (and their unimproved airport), they need look no further than their own elected officials who failed to live up to their end of a bargain they themselves made. This is not a case of corporate greed, but municipal mismanagement.