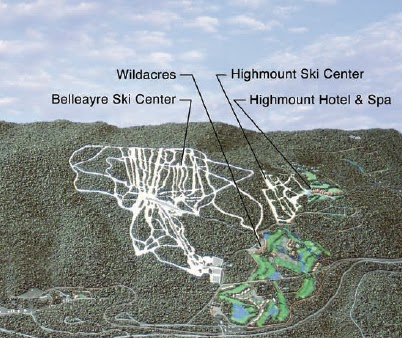 Highmount, NY – We recently caught up with Dean Gitter, Managing Member of the “Belleayre Resort at Catskill Park” project, a proposed resort development adjoining state-owned Belleayre Mountain Ski Center in New York’s Catskill Mountains. Gitter is one of the principals of Crossroads Ventures, LLC, the company which has proposed the controversial development as part of a public-private partnership endorsed by the State of New York.

Gitter was kind enough to agree to an interview about the project.

FTO:  Dean, thank you for taking the time to speak with me today. I appreciate your willingness to discuss the project. Can you please tell me a little bit about where you are in the process?

Because of the changes that have been adopted by the project as a result of feedback from various state agencies and the public, we have had to modify our Draft Environmental Impact Statement (“DEIS”) We believe the Department of Environmental Conservation (“DEC”) will deem our application complete and release the DEIS for notice and comment as soon as the beginning of November.

FTO:  The DEC will then make a determination based on the DEIS and public comments received as part of the notice and comment period, after which there will be an opportunity for appeal?

Gitter: That is correct. We hope to put a stake in the ground sometime in 2013.

FTO:  Can you talk a little bit about the transition of Belleayre from the DEC to the Olympic Regional Development Authority (“ORDA” – the operators of state-owned Whiteface and Gore mountains in the Adirondacks)?

Gitter:  The transition has been slow going. In the meantime, literally dozens of Belleayre employees have been laid off, many of them former permanent staff. This year’s promotional budget has not been announced, but last year is was almost nil. As a result skier visits dropped from 180,000 in 2010-2011 to only 80,000 in 2011-2012.

FTO:  Do you see ORDA as a net positive?

Gitter: Absolutely, they know the ski industry and manage a first class product.

FTO:  Can you please explain the role that the rebirth of Highmount Ski Center will play in the project?

Gitter: As part of the 2007 agreement with the State, the State of New York agreed to purchase Highmount from us. We are probably only a few months away from that purchase being finalized. The state has committed $55 million to improving Belleayre and integrating Belleayre with Highmount.

Belleayre was built at a time when skiing was a relatively young sport. The resort has mainly intermediate and beginner slopes. Thousands of people learned to ski at Belleayre then ran off to Vermont. Highmount represents significant advanced skiing.

FTO:  Yes, as anyone who has skied Belleayre knows, the resort is spread out across a ridgeline and much of the terrain skis similarly – steep at the top, intermediate in the middle, and a short runout to the chairlift.

Gitter: Yes, the terrain at Highmount is more varied and interesting certainly.

FTO:  Will there be lodging and development at both the existing Belleayre and Highmount base areas?

FTO: Can you tell me, have the plans to construct (2,000 vertical foot) trails down to Belleayre Beach been permanently scrapped?

Gitter: I believe the unit management plan endorsed plans to build trails on that side of the resort, but any development there is a ways in the future.

FTO: Assuming you start construction in 2013, what would the timeframe be for the build-out of the entire project?

Gitter: We envision it taking about two and a half years to build the Wild Acres Hotel. We anticipate bringing Highmount back into the fold in about three and a half years (i.e., 2016 or 2017). We plan on building 400 lodging units in the two hotels and 219 units scattered across the property. The 219 units will be built as the market demands. We have the plans for the (Davis Love III-designed) golf course in place already as part of the master plan. All told, I think we’re looking at a five to eight year build-out.

FTO: I would be remiss if I did not take an opportunity to ask you about the regulatory climate you’ve encountered. Tell us a little bit about some of the hurdles you’ve had to overcome.

Gitter: You need to understand two things. There are two layers of (additional) overlap that are unique to this project. First, we are building in a state park. Second, we are building in New York city’s watershed. Were we building the project elsewhere, we would not be subject to either of those additional constraints.

The biggest problem we had was that New York City overplayed its hand. Normally the review process would be before the local planning board, or in this case the two planning boards for the towns that the project straddles. However, state law mandates that where two or more agencies disagree about which should be the “lead agency” for purposes of the review, the DEC makes the final determination. NYC wanted to be lead agency, but the DEC said it had no standing here, but it also said no to (the Town of) Shandaken because it wrongly thought the level of complexity was too great for the town to handle. Consequently, the DEC became the lead agency. That was the single worst moment of the project. The DEC is an agency that simply eats paper. It has 3,000 staffers, apparently 2,999 of whom are devoted to fracking. As a result, the process is very slow.

FTO: Everyone seems to agree that the Catskills region is suffering economically. Everywhere you look there are closed stores and vacant buildings. Were you surprised by the level of opposition the project received from local residents in light of the depressed local economy?

Gitter: Well, let me set the record straight. When we first proposed the project we received some criticisms from locals before they understood the environmentally responsible way we were going to move the project forward. However, now the opposition has virtually faded away. The overwhelming majority is now in favor of the project. The governor is committed to creating jobs. It’s been a dozen years of delay, but things are speeding up, happily, in the future.

Back in the 1960’s the State of New York and some of the local towns commissioned a study that discussed what this region needed to remain sustainable. It’s no secret now, as it wasn’t then. The region needs a bed base to support its tourism industry. Without it, people will keep driving past the Catskills and going to Vermont. Led by the three major Catskills ski resorts – Hunter, Windham, and Belleayre –  if these three resorts got together and marketed the region aggressively, I am confident the region could grow from its current 800,000 skier visits to 1.5 million skier visits with the type of public private partnership we have proposed here spearheading that growth.

FTO: Dean, thank you so much for taking the time to sit down with us today to discuss the project.

Interviewer David B. Cronheim, Esq. is the Chief Legal Correspondent for First Tracks!! Online, an attorney at Norris, McLaughlin & Marcus, PA in Bridgewater, N.J., and author of the ski law blog Ski, Esq. Please feel free to contact the author at DBCronheim@nmmlaw.com.