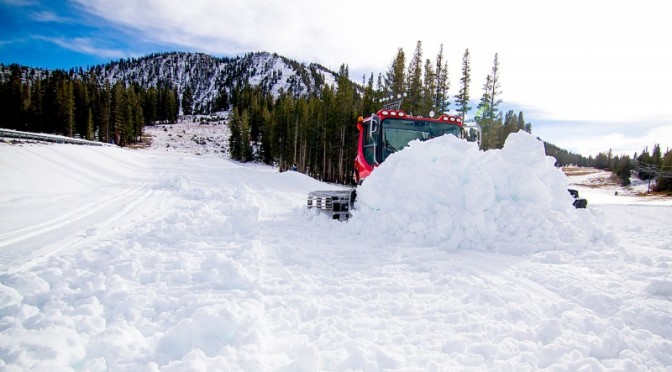 Keystone, CO – Cold weather, productive snowmaking and even a bit of natural snowfall will enable five more U.S. ski resorts to come online for the season this Friday.

In Colorado, Keystone, Copper Mountain and Wolf Creek all plan to open for skiing and riding this Friday, joining Arapahoe Basin and Loveland already operating in the state. Also on Friday, Mt. Rose and Boreal will open in California, the first ski resorts to do so this season in that state.

Keystone has enjoyed a week of productive snowmaking, augmented by five inches of natural snow. Resort staffers will liven up the party with giveaways, contests, free donuts, DJs spinning and of course, skiing and snowboarding. Officials at Wolf Creek near Pagosa Springs in southwestern Colorado have yet to confirm that they will be able to stick to their planned opening date this Friday.

Edit: Wolf Creek confirmed this afternoon that they’ll open this weekend, but delay it by a day until Saturday. Nevertheless, officials admit that “Conditions are very limited with a six-inch base and 14 inches of snow year-to-date.” Treasure Stoke and Bonanza lifts will be operating from 9:00 a.m. to 4:00 p.m., and the Nova lift will be open with both natural and man-made snow servicing Nova and Susan‘s runs.

Copper and Keystone were both originally scheduled to debut their winter seasons on Halloween before warm weather scuttled those plans. Breckenridge and Wolf Creek had each planned to open on November 7th all along, but Breckenridge officials confirmed this morning that they won’t be able to open this Friday as scheduled.

“It’s simply been too warm to be able to make the quality snow we need to provide the best experience for our skiers and riders,” resort officials confirmed in a prepared statement. “We will announce a revised Opening Day as soon as possible.”

U.S. Ski Team racers training pre-season at Copper have been unable to run downhill and super G gates due to snowmaking efforts being curtailed by the unseasonably warm weather plaguing Summit County over the past month, although they have been able to get in slalom and giant slalom training at the resort.

In the Tahoe area, a weekend storm left up to 10 inches of new snowfall along the Sierra Crest, supplemented by snow guns that fired up once the cold air accompanying the storm filtered into the region.  As a result, Boreal will open its Castle Peak Quad chair on Friday, servicing one run from 9 a.m. until 9 p.m. Adult tickets for Friday’s operation will cost $39, or $29 for night operations only beginning at 3:30 p.m. College students and active military will pay only $15 to ski or ride all day. Six terrain park features will be set up for jibbers.

Across Lake Tahoe, Mt. Rose will operate its Flying Jenny carpet lift on the Main Lodge side of the resort from 10 a.m. until 3 p.m. this Friday with terrain park elements including boxes and rails available there as well.

“Last weekend’s storm brought up to five inches of fresh snow to Mt. Rose, and with continued cold temperatures, our experienced snowmaking and operations teams have been hard at work adding to that base,” said Mike Pierce, Mt.Rose’s director of marketing. “We’re excited to get winter underway, and to welcome our guests back for another incredible season.”

Mt. Rose Ski Tahoe plans to remain open from 10 a.m. to 3 p.m. through the weekend, with lift tickets available for purchase at guest services in the Main Lodge for just $10.