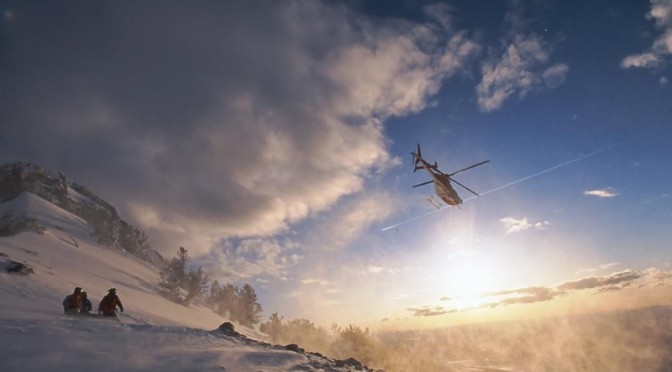 Lamoille, NV – Ruby Mountains Heli-Experience (RMH), in the middle of northeastern Nevada’s Great Basin, is giving away a heli-ski or snowboard trip of a lifetime.

In this remote stretch of seemingly endless alternating desert valley floors and lofty mountain ranges, situated some three and a half hours west of Salt Lake City and five hours east of Reno, there’s literally zero competition for fresh tracks. You’re probably only sharing the bounty with up to 15 other patrons of RMH at a time. Lamoille, Nev.’s population is a whopping 105 people, and barely over 51,000 people in total inhabit the entire 17,203 square miles of Elko County, an area nearly as large as the entire states of Vermont and New Hampshire combined. The nearest chairlift is literally hundreds of miles away. There are no hungry locals calling in sick for face shots on a powder day.

It is here in Lamoille, west of the Ruby Mountains that pierce the sky at over 11,000 feet, that Snowbird ski patroller Joe Royer first opened RMH in 1977. Prodigious amounts of desert freeze-dried powder drape those mountains every winter. Helicopters and snowcats access terrain for all ability levels, ranging from 40-degree steeps to open bowls and low-angle tree runs. Runs include “Terminal Cancer Couloir,” an American icon, 1,800 feet of steep adrenalin that is ranked among America’s “Fifty Classic Ski Descents,” as selected by respected mountaineers including Chris Davenport, Glen Plake and Lowell Skoog.

“You don’t have to be an expert, you just have to enjoy skiing,” says Royer, who is credited with the first decent of Terminal Cancer Couloir in 1975, two years before he opened RMH. “The greatest reward is being able to provide a backcountry experience to our guests and hear them say, “That’s the best day of skiing in my life!”

Today Royer is the undisputed dean of American heli-ski company operators and is most proud of being an active heli-guide for the past 38 years, skiing daily with his guests. He continues to play significant a role in the Heli-Ski U.S. Association, which he co-founded and has often led as president. He has guided skiers down tens of millions of vertical feet from January to April each and every season. In short, Royer has more winter guiding experience in the Ruby Mountains than anyone else, period.

The accolades for RMH have been pouring in for decades ever since Royer first made that westward trek from Utah. According to National Geographic, RMH delivers “an Alaska-size day of powder shots in the Lower 48.” It calls the food and drink at RMH’s Red’s Ranch “spectacular…extravagant,” while Forbes more succinctly calls it “gourmet.”

Royer and his family continue to own and operate RMH, and the three-day, $4,650 package that they’re giving away includes three nights lodging (double occupancy), guide service, ski rental, a minimum guarantee of 20 runs, and all meals except dinner on arrival night.

Winning is simple. The winner will submit the most compelling video answering the question, “Why do you love skiing or riding, and why it is special to you?”  The winner will be announced January 10, 2015. Entries are due before January 1, 2015 and should be submitted to info@helicopterskiing.com or uploaded to the RMH Facebook page.

For more information, visit the RMH website at www.helicopterskiing.com. Who else could own that domain but Joe Royer?