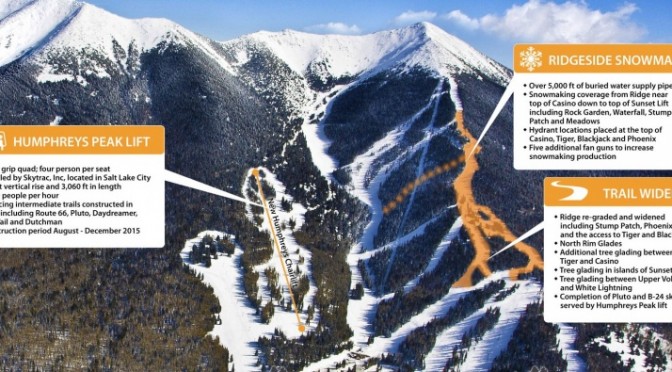 Flagstaff, AZ – Construction is well underway on the new Humphreys Peak Lift at Arizona Snowbowl. Scheduled to open this December, the new chairlift is the resort’s first in 30 years.

The fixed-grip lift is the cornerstone of a roughly $2 million investment into the northern Arizona ski and snowboard resort this summer. Named after Humphreys Peak, the highest summit in the state and part of the San Francisco Peaks above Snowbowl, Humphreys Peak Lift is the resort’s first quad as well. It will span over a half mile with a vertical rise of 775 feet and carry 1,000 riders per hour to popular intermediate trails built in 2011, including Route 66, Pluto and Dutchman.

Also this summer, James Coleman — managing partner of Purgatory Resort in Colorado, and Pajarito Mountain and Sipapu Ski and Summer Resort in New Mexico –became a partner in the existing Snowbowl ownership.

“Eric Borowsky pioneered one of the most progressive and innovative snowmaking systems in the country to secure the future of the Snowbowl,” Coleman said. “As we look to the upcoming winter and beyond, we are focusing on creating an even better mountain experience for our guests with the installation of the new Humphreys Peak Lift and future high-speed lifts.”

The Humphreys Peak Lift is only the first of several new chairlifts planned at Snowbowl. The next lift on the docket is the Grand Canyon Express, Snowbowl’s first high-speed lift. Engineering and planning for the approved Grand Canyon Express, which will serve 90% of the terrain currently served by the popular Agassiz lift, is currently underway, and mountain crews are adding snowmaking infrastructure to support the future lift. An opening date for the new Grand Canyons lift has not been announced.

In addition to building snowmaking infrastructure for the future Grand Canyon Express, mountain crews spent their summer burying nearly a mile of snowmaking pipe on the mountain’s popular Ridge Trail, which will allow Snowbowl to open Midway earlier in the season and make snow on key trails including Casino, Tiger, Black Jack, Phoenix, Rock Garden, Waterfall, Stump Patch and Meadows, down to the top of the Sunset Lift. Hydrant locations for five additional fan guns have been strategically placed at the top of Casino, Tiger, Blackjack and Phoenix.

Trail crews have also re-graded and widened Ridge runs including Stump Patch, Phoenix and the access to Tiger and Blackjack. Additional tree glading, dubbed the North Rim Glades, has been thinned between Tiger and Casino, as well as in islands along the Sunset lift, and between Upper Volcano and White Lightning. The Pluto and B-24 ski trails served by the new Humphreys Peak lift have also been completed.

For the 2015-16 winter, Snowbowl guests will enjoy the new Humphreys Peak Lift alongside Snowbowl’s six existing lifts, 40 trails and the Sunset Terrain Parks. Coleman added that Power Pass season pass holders will have unlimited access to Arizona Snowbowl, plus the combined 3,088 acres, 28 lifts, over 200 trails and 13 terrain parks including his other three resorts all located within a convenient drive of each other.

“Arizona Snowbowl, Purgatory, Sipapu and Pajarito make up the largest ski area collective in the Southwest, and we’re committed to making these resorts the best in the region,” he said. “Our season pass collection, headlined by the Power Pass, offers the best value for skiers and riders who live in and love the mountains of the Southwest and, for the first time, guests will enjoy unlimited access to some of the best terrain in Arizona, Colorado and New Mexico, all on a single pass – the Power Pass.”

Coleman said that in addition to the Grand Canyon Express, future Snowbowl improvements include replacing existing lifts and upgrading the base lodge.

As a partner at Arizona Snowbowl, Coleman is now the largest ski area operator in the Southwest. After 15 years as the managing partner at Sipapu, located near Taos, N.M., Coleman acquired Purgatory in February 2015 and began managing operations at Pajarito in November 2014.