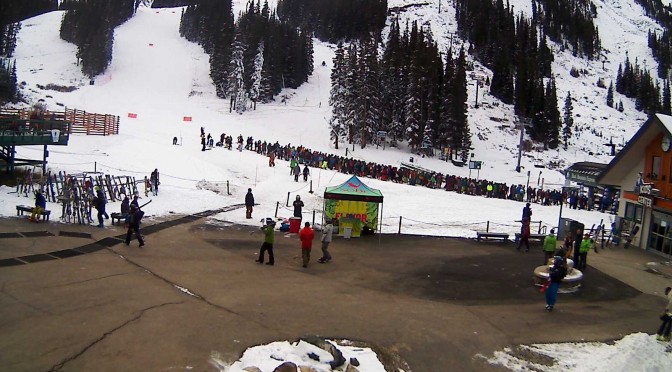 Dillon and Georgetown, CO – Colorado’s 2015-16 ski and snowboard season started today when eager snow riders gathered at not one, but two of the state’s ski resorts to load lifts for the first time this winter.

The season kicked off simultaneously at Loveland Ski Area and Arapahoe Basin, on opposites sides of the Continental Divide. At 9 a.m. Loveland’s Chair 1 began delivering riders 1,000 vertical feet to the top of the Catwalk, Mambo and Home Run trails for their first lift-served turns of the season on a mile-long descent on 18 inches of base. Simultaneously at Arapahoe Basin Ski Area, the Black Mountain Express high-speed quad chairlift began delivering eager snow riders to the top of the intermediate High Noon run to inaugurate their 2015-16 ski season.

Several resorts in Colorado have taken advantage of cold nighttime temperatures to commence snowmaking operations over the past several weeks. Copper Mountain began making snow on the morning of Sunday, October 4, and Aspen Mountain, Eldora Mountain Resort, Loveland Ski Area, Arapahoe Basin Ski Area, and Steamboat  have made snow since then as well. Thanks to more than 21 inches of natural snowfall and the welcome arrival of snowmaking weather in the last several days, Loveland and Arapahoe Basin tied the friendly annual race to be the first to open for the season, the first tie between the resorts since 2008-09.

“In the last several days, many Colorado snowmakers and slope groomers have been working alongside Mother Nature to prepare for what is sure to be an exciting ski and ride season” said CSCUSA President and CEO Melanie Mills.  “We’re always thrilled to get another Colorado ski season underway and this year is no exception.”

Here are a few photos from today’s festivities to feed the stoke: