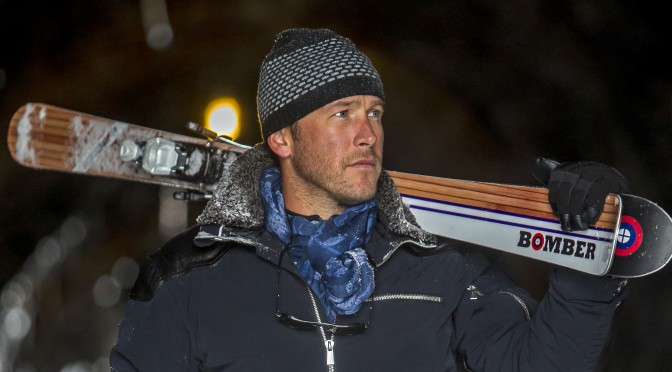 New York, NY – This month, Bode Miller and Bomber Ski confirmed rumors flooding the ski industry when they officially announced that Miller, the most decorated U.S. Olympic skier of all time, has switched to the Manhattan-based luxury brand and artisan ski equipment company as a part owner.

Miller made the announcement jointly with Bomber Ski owners Robert Siegel and KT Stallings Bren at “A Snow Affair,” a fundraiser for the U. S. Ski Team hosted at Bomber Ski’s Fifth Avenue headquarters.

“For the first time ever, I found a ski company that enables skiers of every level to experience the quality of skis normally reserved only for the best racers in the world,” Miller said, addressing more than 350 avid fans attending the event. “On Bomber Skis, all skiers – beginner, intermediate and expert – will be able to greatly enhance their everyday ski experience. I want to share that thrill with every recreational skier.”

Contrary to the typical sponsor relationship, not only will Miller ski exclusively on Bomber Skis, but he joins Bomber as an equity owner and is an integral part of the company, working closely with the Bomber team in all aspects of the business, including working directly with the expert craftsmen at Bomber’s factory in Italy.  The company will produce a signature line of Bode Miller products, including signature poles that are already available in Bomber’s Madison Avenue store.

Miller joins five-time World Cup Champion Marc Girardelli, the only other ski racer in history to have won gold in World Cup races across all five disciplines in a single season, as a Bomber Ski Global Brand Ambassador, uniting two of the world’s most decorated ski racers in history.

“I’m excited to represent the brand, but equally excited to be playing an essential role at Bomber,” Miller announced.  “Our skis are remarkable, and to start with such design integrity and quality from which to engineer the skis I have dreamed of is incredible.” Miller says he will continue to develop Bomber’s race skis and perhaps personally take them on the World Cup Tour. He also hopes to sign young American racers to the brand.

Siegel added, “The more Bode and I spoke, I came to greatly appreciate that far beyond being one of the most prolific skiers of all time, he understands the physics of skis like no one else.  Most people with his understanding of engineering have never personally pushed a pair of skis to the limits he has. In fact, no one on our planet has taken skis at the speeds and forces that Bode Miller has. The combination of his intellect, his incredible athletic balance and his ability to produce jaw-dropping performances on skis creates an unmatched opportunity to design and build skis like no other, particularly when paired with the incredibly passionate team that designs and builds Bomber Skis in our factory.”

Every pair of Bomber Skis is hand-crafted at its factory in the Italian Alps, using a tip-to-tail wood core and multi-layer sandwich construction. In addition to its All-Mountain, Powder, and recreational race skis, Bomber is an official supplier to the U.S. and Canadian Ski Teams, producing a full line of World Cup-regulation race and mogul skis. American World Cup freestyle skiers Jeremy Cota and KC Oakley, both number one on the U.S. Freestyle Men’s and Women’s Teams, compete on Bombers.