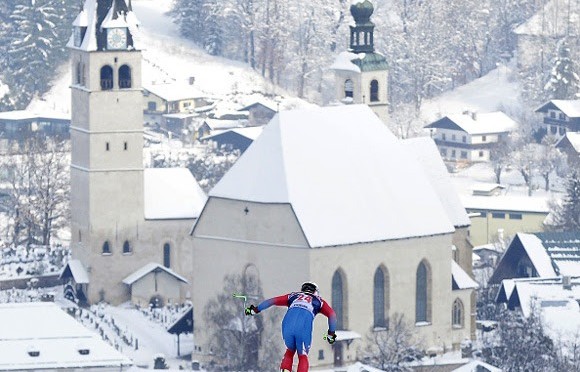 Kitzbuehel, Austria – Ski racing is alive and well in the Tyrol, and the Streif feels like the center of the universe this week. To put into perspective just how big this race is, nearly 50,000 crazed fans will descend upon the ski racing Mecca that is Kitzbuehel. The crowd for Thursday’s second downhill training run is bigger than the race day crowd at most venues. Media is buzzing. The glühwein is flowing. Legends like Didier Cuche, Marco Buechel, Daron Rahlves and Bode Miller are amongst us. Welcome to Kitzbuehel, the Super Bowl of ski racing.

The energy surrounding the Hahnenkamm downhill in Kitzbuehel can be overwhelming. The streets are ablaze with fans hungry for on-hill action—the speed on the Streif, the crashes, the thrilling victories—and après ski fun alike. Through it all, the athletes work to absorb the good energy and let the adrenaline fuel them through the weekend.

“The conditions are fantastic. It’s a good course and there’s a lot of risk,” said U.S. Ski Team athlete Steven Nyman of Utah. “They’ve put in the risky sections, but it’s not too dangerous for the athletes. The most dangerous part is the Hausberg and it’s pretty rough coming into there if you take the outside line, so it’s kind of forcing us to the inside which is very intimidating to the racer…to take that takes some guts so you have to really get your hips up and over your skis if you want to stay stable and be fast across the Hausberg. For the most part, it’s really fun to ski, as always.”

The men will take on the Streif this weekend in super G, alpine combined, downhill and slalom events. For the U.S. men, Nyman was fourth fastest Thursday with Travis Ganong (Squaw Valley, Calif.) sixth on Tuesday. However, from Ted Ligety’s (Park City, Utah) participation in the inaugural Audi Quattro #SuperQ event against competitors Henrik Kristoffersen of Norway, Marcel Hirscher of Austria and Felix Neureuther of Germany, to dodgeball and volleyball games with the American downhillers, the week has already been action-packed for the Americans.

“Today, for the most part, I was really happy with the way I skied, and stepped up, and I have to maintain the focus through the super G,” said Nyman. “I know I can do well here—it’s usually a fast set, which is more my style of super G—and then bring it into the downhill on Saturday.”

Meanwhile, in Cortina, the women race a downhill and super G. Lindsey Vonn (Vail, Colo.), now just 50 points behind Switzerland’s Lara Gut in the overall, has an opportunity to re-take the lead and break the current downhill win record of 36 victories with a victory on Saturday.

“It was amazing to tie Annemarie Moser-Pröll in Zauchensee, and last year I broke the record here, so hopefully this year I can break another record here,” said Vonn. “Cortina is just a special place for me, I have a lot of confidence and I’m skiing well so I hope to do well this weekend.”

“I thought it was a good run, but I wasn’t trying very hard,” said Vonn. “I was mostly just relaxed skiing, but I think the last few races I’ve skied my best when I’m more relaxed. It was a good first run, and good snow.”

The women then race super G on Sunday.