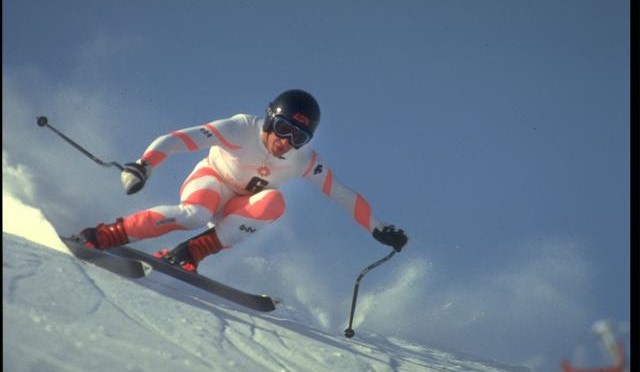 Gresham, OR – Olympic champion Bill Johnson, whose storybook 1984 season ushered in a new era for American ski racing, passed away Thursday at an assisted living facility outside Portland at the age of 55.

Johnson’s passing closed the final chapter in a tumultuous lifetime that saw him rise to the highest level in his sport in a brief but bright career. Born in Los Angeles, after surviving a troubled youth that included a criminal record Johnson took to ski racing at Bogus Basin in Idaho when given a choice between jail time and a ski academy. He then moved on to Mt. Hood in Oregon as well as the racing program at Mission Ridge, Wash.

At the age of 23, Johnson burst onto the World Cup scene in 1984, winning the storied Lauberhorn downhill in Wengen. It was the first American men’s World Cup downhill victory in the modern era. The next month, he matched his brash cockiness with an Olympic gold in Sarajevo, then closed the season with wins in Whistler, British Columbia, Canada and Aspen, Colo.

Johnson loudly dismissed his rivals, to the disdain of his European colleagues. Austrian great Franz Klammer dismissed him as “the nose picker.” But good gear choices, an aerodynamic tuck and a remarkable ability to absorb terrain undulations backed up Johnson’s arrogance.

Johnson refused to call himself an athlete. “An athlete is someone who trains,” he once said. “I ski fast, that’s all.”

Johnson retired from competition in the late ‘80s after a series of injuries and personal setbacks. But after his endorsement money ran out and with the impending 2002 Olympics in Salt Lake City, he tried to stage a comeback at age 40. On March 22, 2001, he was critically injured in a crash at The Big Mountain (now Whitefish Mountain Resort) in Montana during the U.S. Alpine Championships. Near death, he remained in a coma for three weeks before regaining consciousness.

While Johnson did ski again after the accident, his racing career was over. In 2010 a series of mini-strokes followed by a massive seizure left him with further physical disabilities, including the loss of the sight of his left eye and the movement of his right hand. He needed help to smoke and eat, and in recent years was confined to an assisted living facility.

Last March, on his 55th birthday, friends and ski racers around the world reached out with tributes to one of the greatest downhillers of all time.

Johnson’s Olympic gold punctuated a stellar Olympics for the U.S. Alpine Ski Team in Sarajevo, winning five medals including gold from Johnson and Phil Mahre. His accomplishments motivated an entire generation of American ski racers, with the team’s current success rooted in the achievements of that 1984 Olympic Team.

Johnson is survived by his mother and two sons. Details on any services are pending.