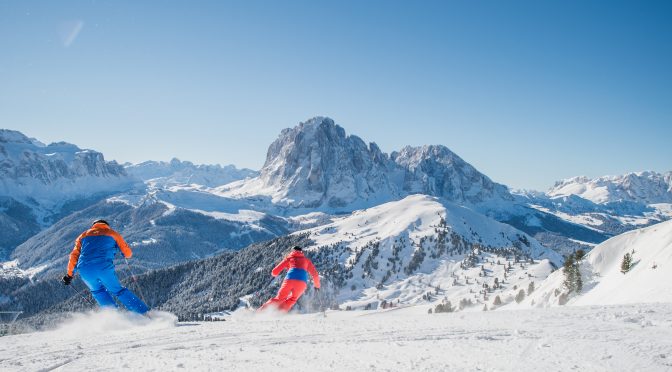 Early season skiers will benefit from one free day of skiing and one free night of lodging at participating hotels when purchasing a Dolomiti Superski pass of four days or more, from November 26 through December 24. Special rates will also be offered for instruction and rentals.

The World Cup ski circuit will once again visit the region this winter, at Val Gardena (December 16-17), Alta Badia (December 18-19), and Cortina d’Ampezzo (January 28-29). Packages are available for ski racing fans including accommodations, a ski pass and tickets to the races.

Then when spring arrives, from March 18 through the end of the season, sun worshippers will get one free day of skiing and overnight accommodations when booking seven days. Special rates for ski rental and and instruction will also be available.

New this year,the Valle Silver pass allows skiers to ski for five or six consecutive days in the four areas of Val di Fassa/Carezza, Val di Fiemme/Obereggen, San Martino di Castrozza/Passo Rolle and Alpe Lusia/San Pellegrino. The new offer will allow skiers to enjoy over 230 km of slopes in the skiing areas of Trentino, and parts of South Tyrol and Veneto. The six-day adult pass costs €207 for the low season, € 233 for mid-season and € 259 for high season.

A new eight-day ticket replaces the 12-day ski pass this season, providing more flexibility for those who do not want to commit themselves too far in advance to too many days on the slopes. The adult pass costs € 355, while juniors (born after 11/26/2000) pay €240 (children under 8 ski free in Dolomiti Superski). Dolomiti Superski also offers point cards with 750 points for € 60, or 1.400 points for € 100. Points are deducted by tapping your pass at the turnstiles according to the displayed point chart. Remaining points can be transferred to the next season, and both cards are refillable.