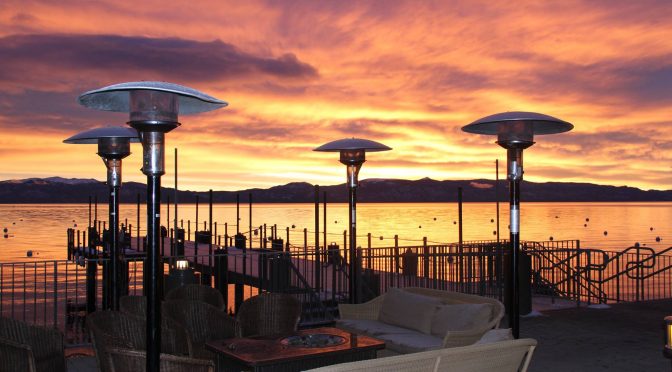 Lake Tahoe, CA/NV – Coming off one of the longest seasons in recent memory with chairlifts turning for nearly seven months, Lake Tahoe area ski resorts are ramping up for another snow-capped winter season with ongoing capital improvements, new VIP services and amenities, and additional air service for 2016-17.

The Reno-Tahoe International Airport (RTIA) continues to add air service to the region with additional nonstop flights this winter from New York, Atlanta, Dallas, Los Angeles, Long Beach and other major gateway air cities. Having never experienced a closure due to snow, RTIA has completed more than $27.5 million in renovations including additional dining/shopping options, expedited baggage handling and a streamlined security process.
Founded in 1966 as Ski Incline, Diamond Peak celebrates its golden anniversary this winter with a series of events focused on the history of the resort. Expect a historic ski/snowboard film and speaker series featuring classic ski films from the 1960s through today, stories and multimedia from the resort’s past, plus decade-specific costume contests and other ways to join in the fun. In addition, Diamond Peak’s lodge will display images and memorabilia from throughout the resort’s history.
The special 2016-17 “golden” Flex Pass multiday ticket at Diamond Peak begins at $50 per day for adults. Available in 2-7 day increments, the direct-to-lift Flex Pass is fully transferable, can be used any day and is valid all season long.
Heavenly Mountain Resort is expanding its Ski and Ride School offerings to allow guests to customize their day on the slopes thanks to the new “Design Your Own Experience” private lessons. Guests simply fill out an online form indicating their personal preferences on terrain, style, development and more. For those who want to book a lesson on the fly, Heavenly will also be placing new on-mountain kiosks throughout the resort enabling guests to conveniently reserve a lesson, coach or guide.
New this season, the resort will be debuting EpicMix Time, an expansion of the Vail Resorts EpicMix app, which will allow guests to access lift and gondola waiting periods in real time across the entire mountain. EpicMix Time is being expanded this year to include all three Vail Resorts Tahoe properties: Heavenly, Kirkwood and Northstar.
Guests can cap off a hard-charging day on the mountain by celebrating at Heavenly’s “Unbuckle at Tamarack” daily après parties with new themed weeks planned around holidays such as Mardi Gras, Carnival, Spring Break and more.

Homewood Mountain Resort will be welcoming new executive chef Ben Deinken, Jr. to manage the culinary experience at its lakefront West Shore Café and Inn, across the road from the resort. The West Shore Café will be welcoming guests with entirely new menus, locally sourced ingredients, a Wine Spectator award-winning wine list, hand-crafted cocktails and stunning views of Lake Tahoe. After a full day on the slopes, kids can enjoy complimentary s’mores while Mom and Dad relax with a signature West Shore Toddy.

On the slopes, Homewood’s Snowcat Adventures return this winter for a full-day guided experience to the top of Ellis Peak via the resort’s new enclosed snowcat. Reserved for up to ten skiers or snowboarders per day, Homewood’s snowcat adventures access over 750 acres of wide open bowls, perfectly spaced trees and private powder stashes with jaw-dropping views and vertical laps of over 1,800 feet.

Skiers and snowboarders can also take advantage of Homewood’s three-pack lift ticket for $59 per day with no blackout dates.

Kirkwood Mountain Resort will be broadening the services offered by its Expedition: Kirkwood instructional program, ranging from daily mountain guide service to private snowcat tours. E:K’s popular Discovery Series focuses on boosting the confidence and skills of intermediates by exposing them to the unique and challenging terrain.
As at Heavenly and Northstar, Vail Resorts is bringing EpicMix Time to Kirkwood for the first time this winter. Kirkwood will also be partnering with GoPro to host the second annual #KirkwoodDeep Riders Poll Awards on November 12th in San Francisco.
Mt. Rose-Ski Tahoe has upgraded its pumping capacity to more than double the snowmaking capabilities of nine new Polecat tower-mounted snowmaking machines installed last season. The combination of the resort’s high base elevation and its infusion of $500,000 in system improvements has Mt. Rose targeting an earlier-than-normal opening date of October 31, weather and conditions permitting.
The resort’s Main Lodge return trail is now graded and contoured into a more productive, functional ski trail. As a result of these improvements and requiring only minimal snowmaking, the Slide Bowl side of the resort is now expected to be accessible much earlier in the season than ever before.
Mt. Rose-Ski Tahoe also invested over $1.2 million last season in on-mountain upgrades and trail improvements geared toward first-timers and beginners including four new trails accessed off the newly named Wizard Chairlift and the opening of the Enchanted Forest Family Zone.
Northstar California is getting EpicMix Time this winter, as are neighboring Heavenly and Kirkwood, calculating and displaying up-to-the-minute chairlift and gondola line wait times. Between laps on the corduroy, guests can enjoy the addition of a new Thai food truck at mid-mountain as well as Frites, a cabana located within The Village serving up gourmet fries and craft brews.
Sierra-at-Tahoe Resort has expanded its designated beginners zone featuring “Smart Terrain”, man-made sculpted terrain that rapidly accelerates the learning curve by helping guests gain confidence, balance and control.
In response to emerging food trends, Sierra has also revamped its menus at the base area and on-mountain dining locations to source sustainable, healthier food options including locally inspired dishes at the Solstice Eatery.
Sierra is merging skiing and technology in a new website that will give guests the ability and opportunity to purchase more products, including lessons and rentals, ahead of time online. For those that prefer good old-fashioned face-to-face interactions but still want to purchase lift tickets, lessons and rentals ahead of time, Sierra will also be opening a new remote guest service location at the intersection of Highway 50 and Lake Tahoe Boulevard in South Lake Tahoe.
Squaw Valley | Alpine Meadows will be welcoming the Audi FIS World Cup tour, the world’s premier international alpine ski racing competition, to its slopes in March for the first time in almost 50 years.
As part of $3.6 million in on-mountain capital improvements, Squaw Valley Alpine Meadows will be the first California ski resort to utilize Gazex Inertia Exploder technology, a remotely controlled avalanche mitigation system that uses propane gas and oxygen to create a concussive blast, increasing the efficiency of Ski Patrol in opening terrain. Gazex units are going in at Gold Coast Ridge and Mainline Pocket at Squaw Valley, and two more units at Alpine Meadows located at South Peril and High Yellow.
Additional capital improvements include major enhancements to the resort’s snowmaking systems on Kangaroo Run, frequently used by ski racers for training.  Snowmaking  investments include three new SMI fan guns, 12 HKD low energy guns, replacement of air and water pipelines and upgrades to 102 automatic snowmaking hydrants.
Three new grooming cats are dedicated to high angle and terrain park grooming — two new PistenBully 600 Winch Cats and a PistenBully ParkPro — are joined by a new PistenBully 100 to be stationed at Alpine Meadows.
New this season, Squaw Valley Alpine Meadows will be unveiling a new app powered by SkiLynx offering enhanced functionality including one-touch “group” creation and tracking, chairlift wait times, e-commerce capability to pre-purchase lift tickets directly from the mobile app and a dynamic “Quick Messages” system that auto-populates a user’s location into messages for easy communication with friends and family.
New dining offerings at the resort include an expanded Moonlit Snowshoe Tour & Dinner series at the mid-mountain Chalet at Alpine Meadows, Farm to Table Dinner + Movie series at Olympic Valley Lodge and the ever-popular holiday dinners on Thanksgiving, New Year’s Eve and Valentine’s Day. In addition, menus across the resort are reinvigorated with more fresh and healthy options, including items locally sourced from the Tahoe Food Hub and more grab-and-go offerings to help guests get back out for more laps on the mountain.