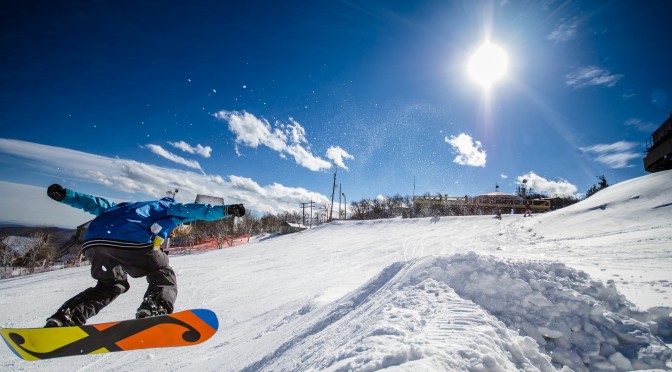 Snowboarders and freestyle skiers benefit by having a larger park with better features, an advanced lighting system and a dedicated surface lift. Meanwhile, general skiers gain access to more acreage in the resort core, where the old park was situated.
“The new terrain park is fully self-contained, which opens up more skier terrain on the Powder Bowl Slope,” says resort general manager Ryan Costin. “That will be nice for the general consumer not being pushed to the Freestyle Slope on every single run. It allows us to spread out skier options on the lower portion of the mountain.”
The revamped terrain park is a significant upgrade from the previous location. It’s the largest park in resort history and will rotate features from an inventory of more than 50 features. It is graded and shaped specifically for terrain park activities and has its own state-of-the-art snowmaking system. Costin says park enthusiasts will love the surface tow lift because they won’t need to access the regular lift system after every run.
“They’ll be able to make as many runs as they want and conceivably be there all day long without ever riding the lift to the top,” Costin says. “We made it a facility that really highlights that type of activity. And a lot of people who participate in freestyle skiing and snowboarding come at night, so we enhanced that aspect with a really good lighting system.”

Other enhancements for the 2016-17 season at the highest ski resort east of the Rockies include a new exterior paint scheme for the View Haus, the main lodge at the resort. Five more high-tech SMI snow guns have been added to give the resort an arsenal of 65 of the fully-automated guns to go along with dozens of smaller guns. Improvements are also in place in other areas of snowmaking, including more pumps and additional water storage capacity.

“We continue to focus on attention to detail and putting the finishing touches on a lot of the big projects we’ve rolled out over the last few years,” says Costin. “Not only annual upkeep, but also significant changes in regard to decor and overall appearance. And we added street lights with branded logo flags at the resort entrance.”
The resort expects another strong year at its snow-tubing park, which debuted last winter in the resort village and generated more activity than expected.
“I think tubing will be even more popular this year,” says Costin. “We were able to fine tune operational details last year and people really seem to enjoy that activity.”