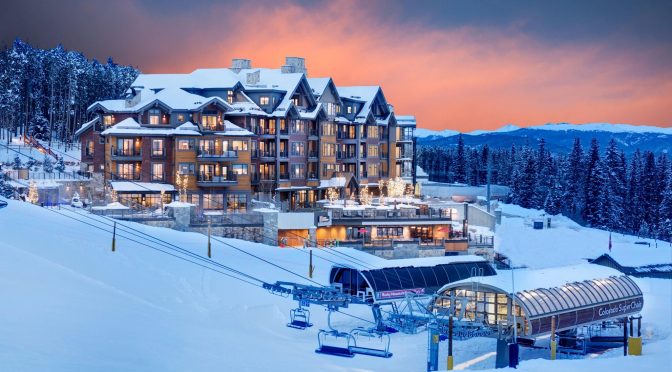 The first phase of the new resort opened at the base of Peak 8 of Colorado’s Breckenridge Ski Resort. The Rocky Mountain and Colorado SuperChairs are located next to GC8, offering true slopeside access. Additionally, the BreckConnect gondola is located just steps away, taking guests to Breckenridge’s Peak 7 as well as to downtown Breckenridge.

“With enormous enthusiasm, the entire BGV family looks forward to hosting guests at GC8. It is truly one of a kind,” said Mike Dudick, CEO of BGV, which also operates the Grand Lodge on Peak 7, Grand Timber Lodge and Gold Point Resort, all in Breckenridge.

On the Grand Colorado’s opening day, BGV celebrated the completion of phase one and its 38 luxury residences with a special reception at the on-site restaurant, Robbie’s Tavern at the Bergenhof. GC8 welcomed owners and guests for first occupancy with a champagne toast and appetizers as they checked in for the very first time. In addition to the Grand Colorado’s initial wave of completed units, the property also made the following amenities available as part of phase one: a multi-feature indoor/outdoor aquatics center, heated garage parking, around town shuttle service, temporary Front Desk, Concierge services, Activities programs, and ski locker rooms.

A few days later, Robbie’s Tavern at the Bergenhof also opened its doors to the public. Named after the late BGV Owner/Developer, Rob Millisor, and paying tribute to the historical Bergenhof restaurant which once stood on this parcel of land, Robbie’s Tavern offers American comfort food, a robust wine and beer selection, and slopeside dining.

The residences offer views of the Breckenridge Ski Resort and the Ten Mile Range, in addition to views of downtown Breckenridge, Baldy and Guyot Mountains, and even Keystone Ski Resort in the distance.

At the time of completion, the resort will offer 265 residences that are available for purchase in one-week ownership increments. There will also be multiple aquatics areas, private movie theaters, an outdoor ice rink, market, cafe, arcade/game room, lobby bar and the Infinity Spa at the Grand Colorado.

Sales of the new property, which began in December of 2014, have been strong, developers say. The Grand Colorado’s sales in December of 2016 totaled $7.1 million, making it the most lucrative December that Breckenridge Grand Vacations has generated in its 33-year history.