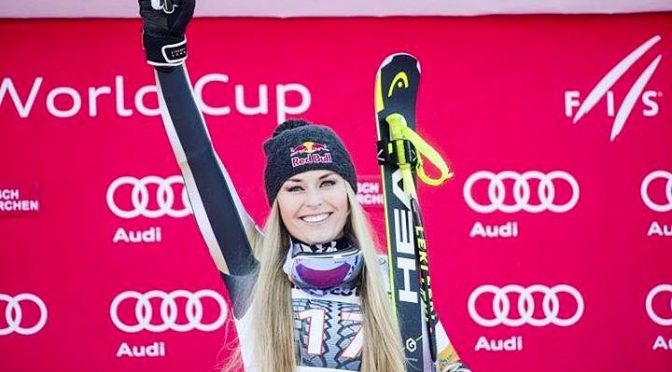 Garmisch-Partenkirchen, Germany – Over the past decade, Lindsey Vonn has established herself as one of the world’s most notable athletes. People on the street know Lindsey Vonn. They recognize her as an accomplished ski racer and cultural hero of her time – a glamorous woman whose image has graced every level of global media.

What they don’t see is the Lindsey Vonn who spends six to eight hours in the gym every day –  sweating and toiling to tone her 32-year-old body to accomplish things never before achieved in her sport. And with each painful injury, that work becomes harder.

It was no surprise that last weekend in the Bavarian village of Garmisch-Partenkirchen, she broke down in tears – letting her emotions loose in the finish area, hugging her father, doing a dance with the fans and looking back up at the imposing Kandahar run with a smile.

It was just a broken arm, some would say, that stole the first six weeks of the Audi FIS Ski World Cup season from her. But this wasn’t just any broken arm. A downhill training crash at the U.S. Ski Team Speed Center at Copper Mountain, CO in November shattered her humerus. She showcased the x-rays on Instagram, detailing the fragmented bones and the metal plate and screws surgeons in Vail used to put it back together again.

Next came the work. There was pain. There were tears. Then there were pull-ups – maybe earlier than doctors would have liked. But she had a mission.

A week before Garmisch, after  just a few on-snow days at Vail, Vonn crossed the Atlantic bound for the tiny Austrian mountain village of Zauchensee south of Salzburg. It was a very special place for her. A year ago, the legendary Austrian Annemarie Moeser Proell was in the finish to greet the American star when she matched the record of 36 downhill wins.

A win would have been a fairy tale. But it wasn’t in the cards. After days of waiting for weather to break for downhill training, Vonn mustered a 13th on the twisty-turn track that rips its way from the towering peak of the Gamskogel to the charming village below.

She tucked away the experience in Zauchensee and traveled to Garmisch with hope and confidence. The Kandahar is one of those big downhills with broad shoulders and bold, sweeping high-speed turns. Six of Vonn’s then-76 World Cup wins had come there (among them a slalom win in 2009) – including a big victory a year ago by 1.51 seconds. Still, she had such little time on snow – and almost nothing at speed – she thought she may need to scale back her expectations.

The Kandahar stands proudly in the shadow of the Zugspitze. The women’s course starts high in the Troeglhang, arcing boldly through the Bavarian forest – big sweeping turns. But while the top may be bathed in sunshine, the winding track is dark and bumpy, making it terrifyingly difficult to visualize your line. This was a course you skied with intuition and feel.

Vonn kept her cards close in two training runs, running fifth fastest on her final try but failing to  make one of the final gates. No worries. She knew she could adjust her line on race day.

Standing at the top, she knew what she had to do. German hero Veronika Rebensburg kicked it off with bib number one to take the lead. One by one, no one could match her time. Then came the matchup ski racing fans can expect to see in every speed race this season as Swiss star Lara Gut came into the gate. Gut knifed it down the Kandahar to take the lead. Soon it was Vonn’s turn, in the familiar 17th start position.

She charged out onto the course, arcing her way onto the Kandahar and through the chicane turns of the Schussanger. The first intermediate time came up red, a slim gap to make up on Gut. Pointing her skis into the fall line, Vonn took on the look of a champion. This was not the same ski racer with the wide and shaky turns of a week earlier. She rocketed down through the Himmelreich and dropped over Waldeck – the steepest pitch on the course.

Suddenly the 2010 Olympic champion was up by .39 seconds over Gut.

Vonn continued to put down bold turns, skiing a courageous line – taking calculated risks, skiing on a mission. Now it was down to the final turns through the FIS Schneisse and into the Tauber Schuss – time ticking and ticking.

As she crossed the finish line, there a moment of silence. Then there was the roar of the crowd. She saw the scoreboard and it was green. She hugged her hands into her chest, looking into the crowd for her father, before collapsing prone on the snow sobbing uncontrollably.

Sport fans see what takes place in the arena. But sometimes they get a look deeper inside. In Garmisch-Partenkirchen on Saturday, they saw into the heart of one of the world’s greatest athletes. Even if you’re Lindsey Vonn with 77 World Cup wins, they don’t come automatically and they are never easy.

It’s one thing to set a goal of winning, it’s quite another to achieve it. Lindsey knows she can match Ingemar Stenmark’s record of 86 World Cup wins. She knows she can race against the men. But she, and only she, bears the burden of achieving it.

“To be honest, I wasn’t sure what I was capable of,” she said fighting back tears in the finish. “I tried to risk more and believe in myself. I know people don’t think about how much blood, sweat and tears it took to get here today.

“Words can’t describe how happy I am right now. Hard work pays off in the end.