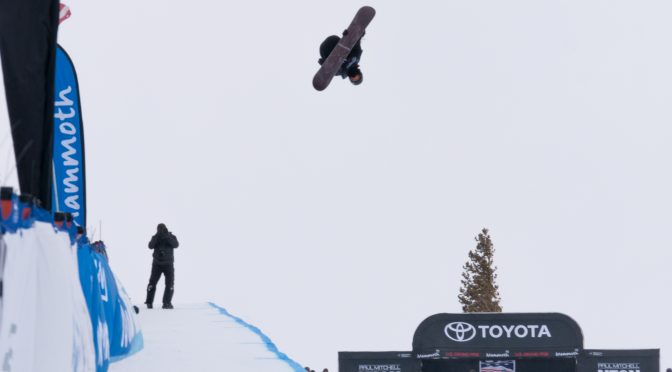 Mammoth Lakes, CA – The American snowboarders were dominant at the Toyota U.S. Grand Prix halfpipe event on Sunday, sweeping the men’s podium and taking two of the top three spots for the ladies. Shaun White won for the men, while Kelly Clark took the win for the women.

Weather made an impact on the 2017 event, with snow falling throughout the week and high winds canceling the men’s halfpipe qualifiers on Saturday. The full field of 29 men took two runs in the final on Sunday. The women were able to get their qualifiers off on Wednesday, but three of the six women were unable to stay for the final, including Americans Chloe Kim (Torrance, Calif.) and Arielle Gold (Steamboat Springs, Colo.), which was rescheduled from Saturday to Sunday. Another Sierra storm descended upon the riders as they competed in the final on Sunday, with conditions deteriorating throughout the comp.

It was a big win for both Clark and White, who are the two most dominant halfpipe riders in snowboarding history, but had not seen the podium yet this season. “I didn’t have the nicest contest at X (Games), so I was excited to come here and be the normal me—put some runs down,” said White, of Carlsbad, Calif., who finished second to last in the X Games pipe last month. His first run consisted of a method to frontside double cork 1080 mute, cab double cork 1080 stale, frontside 540 stale, double mctwist 1260 japan and a frontside 900 to finish things off, scoring a 94.7.

It was also a huge result for Wachendorfer, who scored his first major podium after finding success on the Toyota U.S. Revolution Tour. He’s also the reigning USASA national halfpipe champion. “I’m actually staying for Rev Tour,” he said when asked where he was headed next, “so I’ll be here for another week.”