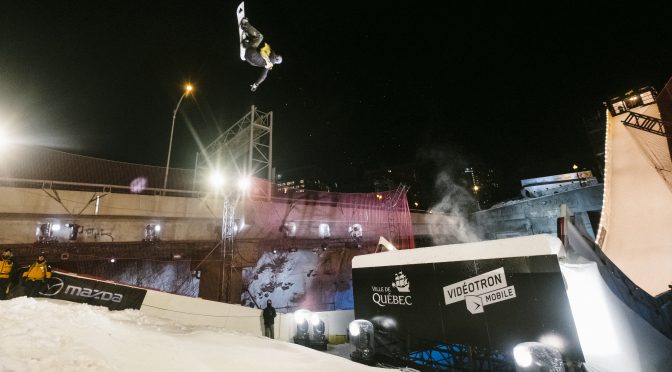 Quebec (QC), Canada – Austria’s Anna Gasser, and Canada’s own Mark McMorris each claimed victory in the 2016-17 snowboard freestyle World Cup season’s sixth and final big air event, which was staged as part of the 2017 Jamboree presented by Vidéotron Mobile on Ilot Fleurie in downtown Quebec City on Saturday.

The event, held in front of a huge crowd of spectators, also served as final stop of the first-ever big air Super Series, a tour within the tour. Both riders also took home the discipline’s Crystal Globe – the career’s first for both – as well as the win in the Super Series.

In the men’s event, McMorris (189.50) earned his career’s third victory in a superb showdown against defending Quebec champion Max Parrot (CAN; 184.75) with Anton Mamaev (RUS; 174.75) finishing in third position.

Both McMorris – the fifth-ever Quebec winner from Canada – and Parrot wrapped up the six-stop season with 2,600 points, but with one more win under his belt McMorris walked away with the coveted trophy.

“To win the series here in Canada, on my last run, last rider to drop for the night, it’s so special!” said McMorris. “On top of that I’m going to slopestyle tomorrow, and it’s looking good for 2018, so I can’t complain about a thing.”

Over on the women’s side, the race for the title had already been decided after Gasser qualified for the finals while her main rival, Great Britain’s Katie Ormerod, did not. Gasser, who made podium appearances in each contest she started this season, snatched her fourth big air win of the season with the final score of 165.00. She missed only the big air held at Copper Mountain, Colo. in December, due to injury. She has also already established an insurmountable lead in the overall snowboard freestyle ranking.

“It’s cold here, but I’m very happy that I landed my runs in not so easy conditions and with other very good girls riding,” Gasser said. “I really enjoyed it today. I’m stoked to be the overall winner as well, and I’m very excited to bring the awards back home.”

Westport, Conn.’s Marino, who won a gold medal in slopestyle at the X Games in January, said that she’s happy to see her hard work paying off.

“I’m definitely really stoked on the result,” Marino said after the event. “It’s so great to see good results come from hard work and I just want to keep it rolling.”