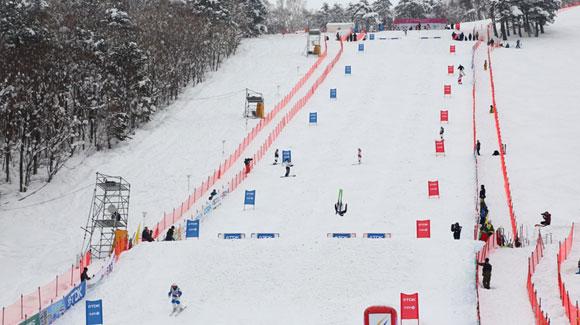 Senboku City, Japan – After a successful Olympic test event in PyeongChang, South Korea last week, the FIS Freestyle moguls World Cup tour is moving on to the second-to-last stop of the season at Tazawako Ski Resort in Japan. Athletes will compete in both moguls and dual moguls Saturday and Sunday.

The U.S. Ski Team has seen a high level of success in Tazawako since it became a stop on the tour two seasons ago. Morgan Schild (Rochester, N.Y.) and Tom Rowley (Long Beach, N.Y.) have both podiumed in duals, with Schild skiing to her first World Cup victory in 2015. Tazawako was also the site of Brad Wilson’s (Butte, MT) triumphant return to competition last season where the Butte, Mont. native took the win in moguls. With strong podium potential on both the men’s and women’s sides, the U.S. team has the opportunity to build momentum heading into the end of the season and the 2017 World Championships.

But the moguls team to watch in Japan is the notoriously strong Canadian squad. The Canadians have been on a roll since Val St-Côme, evidenced by the number of medals garnered by the women and men alike. Aside from the ever-dominant Mikaël Kingsbury, the past weeks have brought out the talent and depth of this Canadian team with performances by the young Andi Naude and the triumphant returns of veterans Philippe Marquis and Marc-Antoine Gagnon.

The last two competitions of the season will give all athletes the opportunity to gain valuable World Cup points to advance themselves and their teams in the World Cup standings. Canadian powerhouse Kingsbury continues to dominate the circuit with five wins under his belt this season and 630 points, while The battle for the women’s title could be a bit more interesting, with 171 points separating current leader Britt Cox of Australia second ranked Justine Dufour-LaPointe of Canada. Her sister Chloé Dufour-Lapointe sits in fourth place in the FIS general standings.

Troy Murphy (Bethel, Maine) and Keaton McCargo (Telluride, Colo.) currently lead the U.S. in the moguls World Cup standings, both sitting sixth. Other U.S. athletes in the top 10 in the rankings include Schild, Rowley and Jaelin Kauf (Alta, Wyo.).