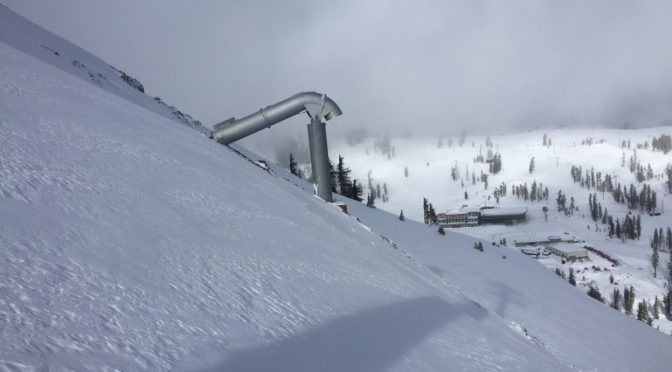 New to the resort, an Astar 350 B3 helicopter will be on site for a portion of the season and four new avalaunchers will enhance avalanche control abilities. The Gazex avalanche mitigation system, a network of large pipes known as “Dragons,” will nearly triple in size and will also include eight new Dragons for avalanche control on Alpine Meadows Road.

Recognizing that cooperation across the larger Squaw Valley Alpine Meadows team is equally critical to getting the mountain open, the resort has engaged the Karakoram Group, comprised of former leaders from every level of our nation’s elite special operations units. The Karakoram Group has been conducting special training throughout the summer with leaders from the lift operations, lift maintenance, grooming, ski patrol and snowmaking departments at both mountains.

“When it’s all said and done, all these tools support us in being safe and efficient in what we do,” said Ken Bokelund, Alpine Meadows Ski Patrol director. “We’re here to get the mountain open. That’s what we live for and we want to do it as safely and efficiently as possible. I’m really excited coming into the season with what we have available to us.”

“Last season was a real challenge for us; we learned a lot” said Will Paden, Squaw Valley Ski Patrol director. “We received 728 inches during the season, and a lot of that came in January and February, so we got a big, heavy punch. We did 56 days of avalanche control, which averages out to something like one out of every three days we showed up to work. For the newer folks on the patrol last year, just the sheer amount of avalanche control was a real learning experience for them.”

The new snow safety tools will be utilized by professional ski patrol teams at Squaw Valley and Alpine Meadows with more than a millennium of combined experience, supported by the efforts of over 2,600 employees, the largest team in the resort’s history.

“The helicopter enables us to assess snow conditions around the mountain, using test explosives, in under 30 minutes. We can use it to drop explosives onto the terrain below and transport our teams up onto the mountain to complete their avalanche control routes on the ground,” said Paden. “We’re approaching it with an open mind. We know it’s windy here and weather will be the limiting factor for flying this thing, but there are those days when it goes blue and there’s no wind. This is one more tool to help us open the mountain.”

Thirteen new Gazex aka “Dragons”
Called Dragons because of their fiery blast, these remotely controlled avalanche mitigation systems use propane gas and oxygen to create a concussive blast to remotely trigger avalanches when staff and skiers are not in the area. The technology provides an additional level of safety to ski patrol teams and greater efficiency as they work to open up the mountains. In 2015, Squaw Valley Alpine Meadows became the first and only California ski resort to install this technology and has been expanding its use annually since.

“What’s great about the Dragons is we can set them off at any time. So we don’t have to wait for light, we can do it in the middle of the night. Groomers can keep grooming safely at night and help keep work roads open so the rest of the team can access the mountain too,” said Bokelund. “This is a big advantage on Alpine Meadows Road, too. We can set them off routinely as the snow piles up, during times when our guys and gals can’t access those areas safely. We’ll be able to maintain access on Alpine Meadows Road more safely and efficiently: it’s exciting for our guests and staff, and our neighbors.”

“Generally speaking we try to place the Dragons in good spots for worker safety, but also for operational efficiency. Meaning that we want to protect our patrollers that are going onto those slopes on skis, but we also want to be able to keep the travel routes open,” said Paden.

Four New Avalaunchers
Avalaunchers are compressed-nitrogen cannons that fire an explosive projectile, similar in concept to a potato gun. Four new avalaunchers, two each at Squaw Valley and Alpine Meadows, will enable ski patrol to trigger avalanches from a distance and control the snow pack prior to opening terrain to the public. Alpine Meadows has traditionally used avalaunchers for snow safety, while Squaw Valley will be reintroducing them, as the mountain has not used avalauchers for many years.

“We’ve seen how they’ve worked at Alpine, and we’re sold on it. The technology has really come a long way,” said Paden. “So we’ve got one that’s going be on a fixed-mount platform in the Lost Lake area, which is the bottom of the Cornice 2 area. We’ll be able to control Cornice 2, the Slot, Saddle Road and the Rock Garden, and potentially Tower 16 with that fixed-mount. But we also have a mobile unit we’re going to be able to move around with a snow cat, and drive into position to control places like the Funnel, North Bowl, the Oregon Trail, and some spots on KT-22 when the storm’s really going. I think for us it’s going to be a very defensive tool, meaning that during big storms well be able to shoot it late in the day to mitigate for the safety of our patrollers so the next day when they go in, we’ve already done control work on there.”

Working Together Across Mountains: special training and the largest team ever
Karakoram Group uses its background in elite military training to develop high-performing teams. Leaders from the lift operations, lift maintenance, grooming, ski patrol and snowmaking departments at Squaw Valley Alpine Meadows have been working with Karakoram Group throughout the summer and into the winter season to identify ways in which they can optimize their operations and develop culture and collaboration across teams.

“The mountain operations mindset is similar to that of a Navy Seal: high-adrenaline and self-challenging. They work in a complex and challenging environment, from lift maintenance hammering rime ice off lift towers, to groomers winching their cats up terrifically steep slopes, to ski patrol hiking along ridgelines to perform snow control. They are passionate about what they do and they hold themselves and their teams accountable,” Dave Cooper, founder, chief strategy officer and chief of operations for Karakoram Group.