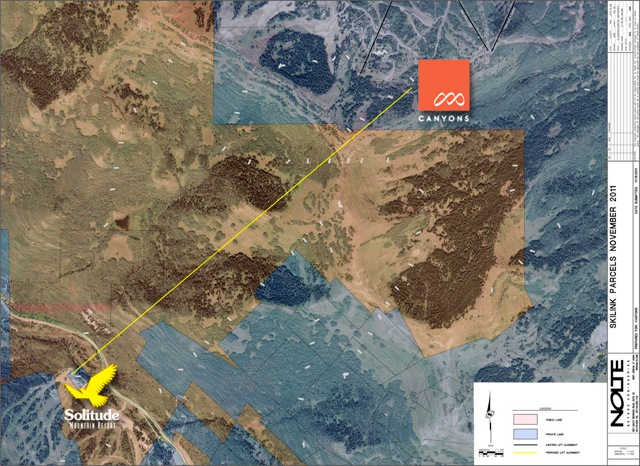 Park City, UT – Two Utah ski resorts which in September first made public their plans to link via a gondola or tram today released details of their proposal to coincide with the introduction of legislation to facilitate the project.

The new transportation connection between the Wasatch Front and Wasatch Back mountains, now dubbed SkiLink, would utilize a gondola lift to unite an precedented 6,000 acres of existing, interconnected ski and snowboard terrain for enthusiasts to enjoy.

“SkiLink creates a game-changing advantage for Utah and for the U.S. snowsport industry,” said Mike Goar, managing director at Canyons. “It would establish Utah as the most interesting and convenient mountain destination in the U.S. and will positively benefit our local economies. Utah features ‘The Greatest Snow on Earth’ and with SkiLink now delivers an unrivaled skiing experience of the largest expanse of ski terrain in the country.”

The eight-passenger SkiLink gondola would terminate near the Daybreak lift at Canyons at one end, and at the base of Solitude Mountain Resort at the other. It would have the capacity to transport 1,000 people per hour each way and is projected to carry skiers between Canyons and Solitude Mountain Resort in just 11 minutes, versus the 45-minute or longer drive that currently exists. Seven Wasatch ski resorts — Alta, Brighton, Deer Valley, Park City Mountain and Snowbird, along with Canyons and Solitude — are separated by only a few miles as the crow flies, but difficult topography now requires one to exit Big or Little Cottonwood Canyons to enter the other or to drive around to the three Park City area resorts.

“Connecting the resorts has been discussed for years, but Talisker Mountain Inc. (owner of Canyons) had the vision to link the slopes of the Wasatch Back and Front in the simplest of ways,” said Goar. “Every day during the ski season, out-of-town and local skiers roam between Canyons and the Big Cottonwood Canyon resorts to experience the diversity of terrain each has to offer. Studies have reported that SkiLink would decrease canyon traffic by providing an alternative to the 45-mile drive between the two canyons that can take 45 minutes to an hour depending on traffic. Plus, staying on the slopes during your ski day is a whole lot more fun than driving.”

SkiLink is designed specifically as a transportation-only connection between Canyons and Solitude and will not impact backcountry skiers, supporters say. SkiLink skiers and snowboarders will enter/exit the gondola at Canyons or Solitude. The gondola will not make any stops at any interim point where riders would exit.

That assertion, however, hasn’t appeased environmental groups like Save Our Canyons, which has openly expressed its opposition to the proposal.

“It is unclear to us how running a lift will reduce cars in Big Cottonwood,” the group has posted on its website. “This system works both ways and for many in the Salt Lake Valley, it is easier/closer to drive to the Cottonwoods than Park City. How will this not increase traffic in Big Cottonwood for those wanting to get to Park City? You have to ride four lifts at the Canyons in order to get on the proposed interconnect, taking at least an additional hour or two before you are on your way to Solitude. Moreover, you would have to buy a lift pass to the Canyons to ride this ‘transportation solution,’ so it seems like more of a ruse to sell lift tickets than to provide a viable transit option.”

Save Our Canyons also points out that while the proposed lift will not have any midway unloading point, skiers and riders can already access the Big Cottonwood side of the Park City ridgeline via the Ninety-Nine 90 lift at Canyons. The proposed transportation lift would allow these riders to ski the Big Cottonwood backcountry and easily return to Canyons.

To support the connection between Canyons and Solitude resorts, U.S. Congressman Rob Bishop, who serves as Chairman of the Subcommittee on National Parks and Public Lands, along with House colleague, Representative Jason Chaffetz and Senators Orrin Hatch and Mike Lee, all Utah Republicans, jointly introduced House and Senate companion legislation today providing for the sale of 30.3 acres of land at fair market value on which the project will be constructed.

Under the directed sale introduced in the Bill, the legislation paves the way for environmental studies that are required by the National Environmental Policy Act (NEPA), the Endangered Species Act and all other applicable laws to commence. Additionally, Canyons says that they will comply with all regulations for seeking permit approvals from Salt Lake and Summit Counties, and will work with Salt Lake City and Summit County on watershed and water quality assurance.

“SkiLink presents tremendous lifestyle, economic and transportation benefits for Utah residents and our nation,” said Bishop. “I have great confidence in the preparation Canyons has completed to this point for the proposed connection. I am pleased to support their vision by introducing this legislation, which will facilitate the next steps of this public process.”

“I am very supportive of the SkiLink concept, and I see in it the potential for an exciting future for the Utah ski industry,” said Hatch. “The idea of connecting Utah’s major ski resorts has been discussed for more than a decade, and I am impressed that SkiLink would enable skiers and snowboarders to move freely among the resorts, significantly enhancing the Utah ski experience with positive long-term benefits for the state’s tourism economy.”

“An economic impact analysis reported that SkiLink would produce more than 500 new permanent jobs for Utah’s travel and tourism industry and could initially infuse $51 million into our local economy,” said Goar. “An estimated 20-year total economic impact could be $101 million per year from SkiLink’s ongoing operation.”

Additionally, preliminary studies of the habitats, wildlife, watershed and visual landscape have been conducted of the proposed SkiLink corridor. Findings reported no significant impacts to wetlands, watersheds, listed species habitat, or other sensitive areas. SkiLink would rely on minimally invasive construction techniques. Helicopters would be used for concrete and tower placement.

As part of the public process, Canyons officials say that they will continue to involve interested parties.

“The SkiLink vision has been in the works for many years and we are glad to be at a point where we can share the details of the proposed project and express our excitement and enthusiasm for the tremendous experience and benefits it offers for Utah and snowsport enthusiasts from around the globe,” said Goar. “We appreciate the efforts, support and assistance of Rep. Bishop, Sen. Hatch, Sen. Lee and Rep. Chaffetz for introducing this legislation that enables the public process to continue. We look forward to the next phases of the process as we work to further support and add to the amazing recreation opportunities our state can offer.”