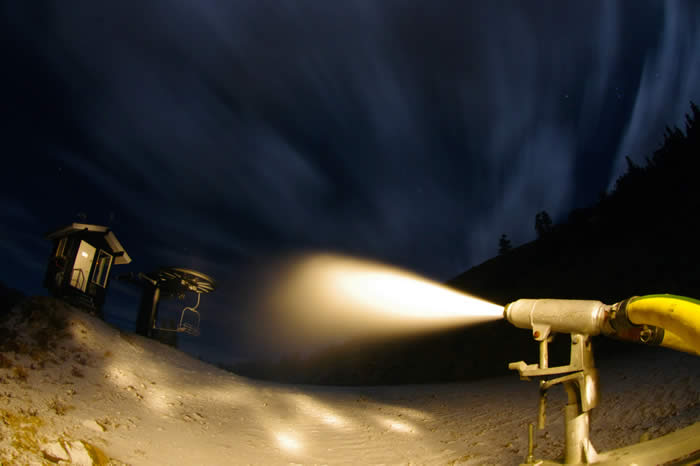 Loveland’s snowmakers took advantage of the cold temperatures that moved into Colorado’s high country last night and began making snow just after 2 a.m. this morning. The crew will work their way down Catwalk, Mambo, and Homerun for Opening Day 2012. These trails form a top-to-bottom run that is over a mile in length and covers nearly 1,000 vertical feet.

“The temperatures finally dropped for us last night and we had a productive first night of snowmaking,” said Bobby Babeon, trail maintenance and snowmaking manager. “We hoped to get things started last week, but the weather didn’t cooperate. The good news is the forecast looks great, and we are still on track for a mid-October opening.”

It typically takes about two weeks for Loveland’s snowmaking team to cover the opening day run with an 18-inch base of snow and tree-to-tree coverage for the first skiers and riders of the season. Loveland started making snow on October 6th last season and opened on October 14th.

“It has been a long summer and the snow that fell last week really got everyone excited about the winter,” said Marketing Director John Sellers. “The buzz of the snow guns around the area is a welcomed sign that another ski season is right around the corner.”

Loveland’s perennial competitor for first to open for the season, Arapahoe Basin across the Continental Divide, expects to start making snow soon, perhaps as soon as tonight but more likely over the weekend as colder, drier air moves into the region.