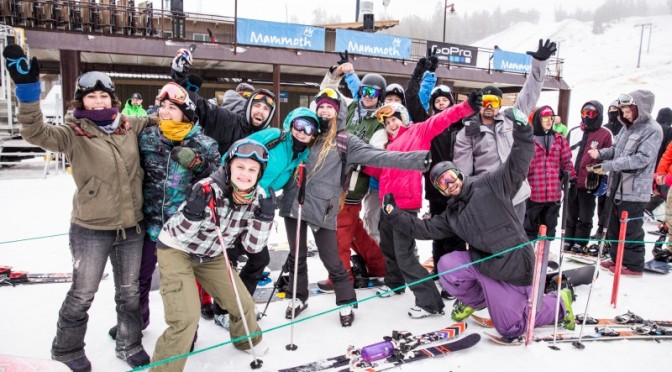 Mammoth Lakes, CA – The champagne was flowing in Mammoth Lakes this morning as the popular California ski and snowboard resort kicked off its 2014-15 winter season.

Riders broke through the season opening banner with first chair in snowy weather at 8:30 a.m.  Mammoth received a dusting overnight and flurries all morning, adding to a base depth of 12 to 16 inches of natural and manmade snow thanks to an early season storm and hard work from the Mammoth Mountain snowmaking team.

Broadway Express is running at Mammoth, with access to Broadway and Upper Main Park. The Unbound Terrain Park crew set up 10 jibs and one jump in Upper Main Park, servicing the throngs of freestyle skiers and snowboarders looking to get their early season hits in.

After the first chair, guests were welcomed by Mammoth Mountain Chief Operating Officer Greg Dallas, who spoke about the excitement of the start of the season.

“Thank you for being here and sharing the excitement and passion of opening day with us,” Dallas said over loud cheers from the crowd. “I want to thank everyone involved, especially our snowmakers, for making this another fantastic opening. Here’s to a great year!”

Crowds of loyal Mammoth guests gathered on in Tusk’s Bar at Main Lodge to toast to the season with the now traditional Mammoth Brewing Company beer toast.

In honor of opening day, lift tickets were reduced to $50 and the first 50 people in line at Broadway Express were gifted free lift tickets to ski and ride for the day.