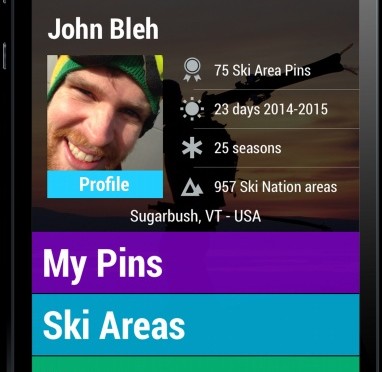 Skiers and snowboarders can also collect free digital pins to track a lifetime of all the places they’ve been, how many seasons on snow, gear preferences, skill, and more.

“Ski Nation is for all skiers regardless of age, experience, skill, or their home mountain,” says Olympic Gold Medalist, World Champion, and co-founder, Billy Demong. “This is the first app that includes alpine, cross country, and ski jumping.”

The first version of Ski Nation is a starting platform to build an open, independent, and comprehensive network for skiers and industry members to connect.

“Our idea is that Ski Nation will be built by skiers without control by a single resort, manufacturer, media company, or marketing agency,” says Turner.  “There’s a need for a broad-based free flow of information and a way for small ski area operators and gear companies to participate in the mobile app arena.”

For skiers, the app is free and their personal information is secure. In addition to ski area vitals, the mobile app rotates trivia tidbits to engage users in the rich history and culture of riding snow. Future plans include the opportunity for resorts, gear companies, and sponsors to make information and offers available directly to skiers on an opt-in basis.

“This is a humble start to a never-ending work in progress,” says Turner. “We’re a grassroots, bootstrap operation and success is only possible with the support and participation of skiers, snowboarders, and industry members across the continent. After that we’ll go global.”

Download the free Ski Nation mobile app at www.SkiNation.com, in the Apple App Store, or (beginning Nov. 21) at Google Play.