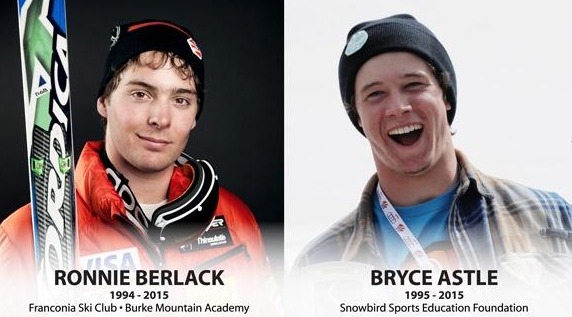 Soelden, Austria – The U.S. Ski Team has confirmed that two of its promising development-level ski racers were killed today in an avalanche in Soelden.

The two — Ronnie Berlack, 20, of Franconia, N.H. and Burke Mountain, Vt., and Bryce Astle, 19, of Sandy, Utah — were among a group of six U.S. athletes freeskiing at the Austrian resort that serves as a European training center for the U.S. team. The other four skied out of the slide.

“Ronnie and Bryce were both outstanding ski racers who were passionate about their sport – both on the race course and skiing the mountain,” said U.S. Ski and Snowboard Association President and CEO Tiger Shaw. “Our hearts go out to the Berlack and Astle families, as well as to their extended sport family. Both of them loved what they did and conveyed that to those around them.”

Authorities had issued an avalanche danger rating of three, on a scale of one to five, after heavy snowfall in the Soelden area was followed by rising temperatures. Elsewhere in Europe on Sunday, an 18-year-old Swiss man died in an off-piste avalanche while skiing in the Saint Luc/Chandolin region, while earlier in the day in the canton of Graubünden, two German backcountry skiers were injured — one of them seriously — after being being struck by a slide near the Heidelberg Hut in the Ramosch area.

Berlack grew up racing in New Hampshire and had been a student-athlete at Vermont’s Burke Mountain Academy. He was named to the U.S. Ski Team’s Development Team following two top-20s at the 2013 U.S. Alpine Championships and a spring tryout camp.

“Ronnie embodied a love of the mountains and boundless positive energy. He was always upbeat and he was super connected to people in the ski racing world,” said Jory Macomber, USSA Vice President of Athlete Career and Education and Berlack’s coach at Franconia Ski Club. “Whenever I brought up his name, people would smile and share wonderful stories. We will really miss him.”

Astle raced at Snowbird and was invited to train with the development team trip this season. He had posted strong early season results, including two top-10 at NorAm Cup races last month in Canada.

Information on services is pending.