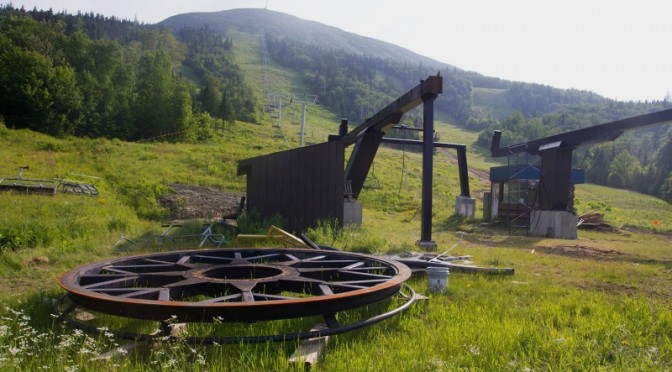 Portland, ME – Fall has now arrived, and Maine skiing celebrated with the first snowmaking test of the season at Sunday River last week.  There is excitement and optimism among the state’s ski area operators based on last winter’s strong 1.3 million skier visit attendance mark, and substantial summer improvements across the state — from the small community ski areas to Maine’s largest resorts — will greet skiers and riders this winter.

Sunday River Resort has spent over $2 million spent this summer in maintenance and upkeep. Some of these projects have been guest-facing, such as improved signage around the resort. Supplemented by a new base area map, from encouraging “keep going” messaging along the windy road to the Jordan Hotel to all-around more concise directions to the South Ridge Base Area, guests will be better able to navigate Sunday River’s expansive base areas. Also, the Glades at Ridge Run residential neighborhood under construction has allowed dirt to be moved to the Sundance ski trail, providing a better slope angle for beginners.

Money is also being spent this year on other upgrades that guests won’t likely notice, including upgraded audio/visual equipment in Sunday River’s conference and wedding venues and a new fleet of dryers in the Grand Summit Hotel.

Sugarloaf’s $1.3 million spent this summer follows the Sugarloaf 2020 ten year plan and features the installation of the state-of-the-art Doppelmayer TRISTAR terminal at the base of the King Pine chairlift, the result of an accident last winter when a broken drive shaft and bad safety switch allowed the lift to roll backwards, injuring seven riders. To maintain all of Sugarloaf’s lifts, the resort has hired Brent Larson as its new Director of Lifts, overseeing both the Lift Maintenance and Lift Operations departments.

Shawnee Peak remodeled its base lodge with expanded seating along with upgraded snowmaking. The ski area unveils their pioneering Learn to Ski program this winter, which gives away a free pair of Elan skis upon completion of three beginner lessons.

Four community areas, Bigrock, Hermon Mountain, Black Mountain and Titcomb Mountain have all improved their financial stability with strategically planned upgrades to their mountain operations. Expanded water capacity and the use of the high efficiency snowguns have allowed the areas to operate on a predictable schedule from Christmas through the late spring. New grooming vehicles have reduced the expense to maintain snow surfaces. The immediate result has been an increase is memberships, season pass sales and daily visits.

The Maine ski season traditionally begins in late October and extends through the first of May.