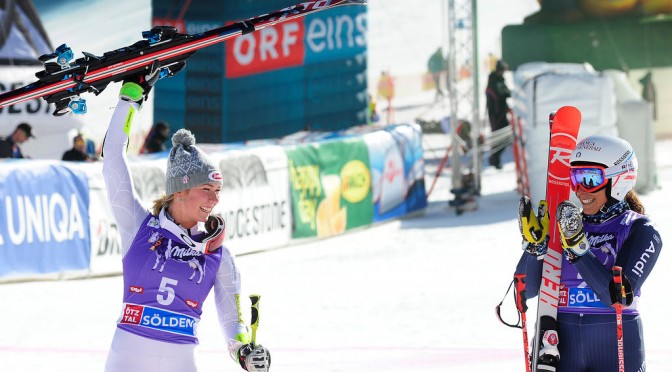 Soelden, Austria – On an icy injected course in Soelden, Colorado’s Mikaela Shiffrin threw down two solid runs of giant slalom to walk away with second place at the first Audi FIS Alpine World Cup of the 2015-16 season. She finished behind Italian Federica Brignone, who won her first World Cup in her eight-year career. Tina Weirather of Liechtenstein took third.

Brignone had stood on the podium seven times without recording a single victory. All that changed on the Rettenbach glacier as Brignone completed two nearly flawless giant slalom runs down a slope so icy the 14,000 fans in attendance could practically see their reflections while watching the competition.

“It is so great,” said a jubilant Brignone, the first Italian to win a women’s giant slalom event since Denise Karbon in January 2008. “I’m so happy about this first win. I have been close sometimes in the past but I thought it had never happened  because I didn’t deserve to be there. Last season was good but didn’t bring enough satisfaction so I took some time off after in the spring. Then I decided to train as hard as ever and I even have a new physical trainer. This good preparation enabled me to push until the end and that felt so good.”

Brignone held nearly a second lead over Shiffrin—who had won last year’s giant slalom in Soelden—after the first run. Although Shiffrin was pleased with her first run, she knew Brignone would be hard to touch.

“I heard that [Brignone] had nearly a perfect run, and I can’t wait to watch it because it’s probably gorgeous skiing and really powerful,” said Shiffrin between runs. “I looked at the time and was like – what can you do?”

Shiffrin’s valiant effort on the second run shaved one-tenth off Brignone’s lead but was only enough for the second step on the podium. Still, the slalom ace was all smiles at the awards ceremony in the finish area as she struggled to uncork a champagne bottle. Although she’s no longer a teenager, she is still only 20 years old.

This was only Shiffrin’s fifth World Cup GS podium, who has been working hard on her GS and super G during the offseason. “I felt really good with my skiing—I felt like I attacked and I had more confidence than I have had in a GS before,” said Shiffrin in the post-race press conference. “I think it’s a good place to start. Just feeling like I can charge down a course and maybe take some risks and actually pull it off – I’ve never felt that before.”

Shiffrin won last season’s opening GS in Soelden, tied with Austria’s Anna Fenninger, the defending World Cup overall champion who is out for the season after a training crash earlier this week. American Lindsey Vonn traveled to Austria this week but opted to sit out Saturday’s race.

Megan McJames finished 48th on the first run and did not qualify for the second run. Marie-Pier Préfontaine, of Saint-Sauveur, Quebec, was the top Canadian, placing 15th with a combined time of 2:28.00. Marie-Michele Gagnon, of Lac-Etchemin, Quebec, finished 25th at 2:29.09.

This 49th season of the women’s World Cup will feature 40 more races, eight of which will be giant slaloms.  The men’s season will launch tomorrow with another giant slalom in Soelden.