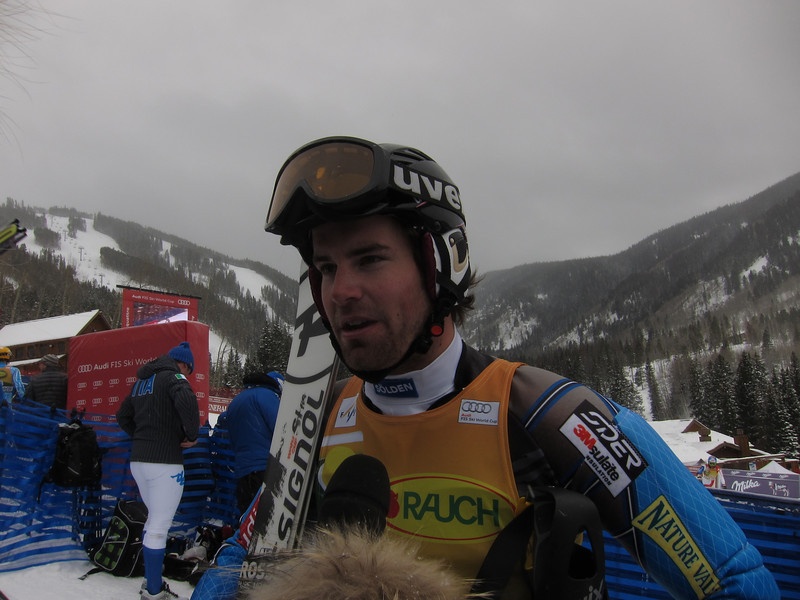 Avon, CO – Olympian Nolan Kasper fought through a nasty stomach virus that hospitalized him less than 36 hours earlier to finish fourth on Thursday in the Audi Birds of Prey slalom, rescheduled from a race canceled earlier this season in Levi, Finland due to a lack of snow. It was also the Vermont native’s first complete race since undergoing hip surgery in September and returning to snow in nearby Vail on Nov. 1.

“It’s race day and you’ve got to bring it, you can’t think about being sick or being hurt. You just have muster up some energy and go,” Kasper said pragmatically. “Everyone goes through injuries. It sucks and it’s something you have to work through. I just had to deal with it, work incredibly hard and try and get as healthy as possible for whenever I could get back. Luckily Levi was canceled and Val d’Isere was moved here, so it was a good first race back.

“I knew I’d race. I was sick for World Cup Finals last year and I still raced. It was a stomach virus and I couldn’t really eat any food, so I was hitting the meal replacement shakes and fluids pretty hard.”

“It was an awesome two weeks in Beaver Creek,” said Ligety. “I feel like I missed a good opportunity in the super G, but winning the giant slalom on Tuesday was awesome and I was pretty happy with the way I skied in today’s slalom. If it wasn’t for that small mistake on the bottom, it would have been a different race. You can feel good about how your training, but you never really know until race day.”

“I made a mistake at the bottom of the Abyss and it’s uphill right there. That’s not the kind of place you want to make a mistake, but I’m pretty happy with the way I’m skiing and my fitness is in the right place. All in all, I’m feeling pretty good,” added Miller. “It’s a bummer to miss an opportunity to have another good finish in front of the home crowd, but early season stuff is really important to gather information about what you need to be fast. At this time of year, it’s less about the results.”

Thursday’s race was good as well to the Canadians, who have been a little short on good news lately. Three Canadians landed in the top 20 as Brad Spence, of Calgary, Alberta, finished 15th, followed by Lachute, Quebec’s Julien Cousineau in 17th and Mike Janyk, of Whistler, British Columbia, 19th.

“To see that we all stack up so close is kinda cool. I just hope that later on in the year we can get a 1-2-3,” said Spence. “On the first run I think I was holding on a little bit. I was a little nervous, with it being the first World Cup of the year, and I wasn’t too happy with how I finished.

“I had to go out and push harder in the second run and I think I redeemed myself. To know what I can do when I throw down a good run like the second one here, is something good to build on.”

Next up on the World Cup circuit are men’s speed races in Val Gardena, Italy, Dec. 16 and 17, and women’s slalom and giant slalom events in Courchevel, France, on Dec. 17 and 18. The next men’s technical races are in Alta Badia, Italy, on Dec. 18 (giant slalom) and Dec. 19 (slalom).