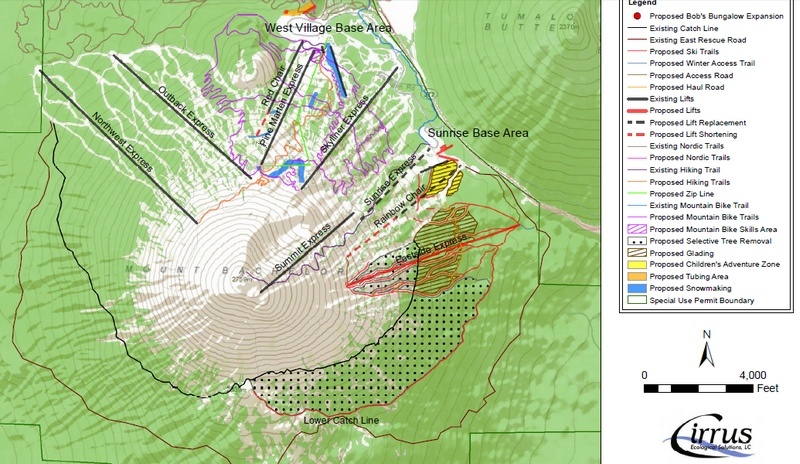 Bend, OR – Deschutes National Forest Supervisor, John Allen, on Wednesday signed a decision on the Mt. Bachelor Ski Area Improvement Project. Pending the outcome of a 45-day appeal period ending Apr. 1, the decision will allow a series of improvements proposed by Mt. Bachelor ski resort to move forward over the next ten years.

Often plagued by stiff winds that blow across the Cascade Crest, Mount Bachelor officials are anxious to add more weather-protected terrain to the mix. The plan approved by Allen opens up 1,200 additional acres of terrain on the sheltered southeastern flank of the resort’s lower mountain, serviced by a new Eastside Express chairlift.

“This would be the first significant addition of ski terrain offered at Mt. Bachelor since 1996,” explained Bachelor GM Dave Rathbun.

The bottom terminal of the planned lift sits in a protected area at an elevation of about 6,100 feet. It would carry skiers in a westerly direction to a top terminal near treeline, at about 7,200 feet near the top of the current Rainbow chair and a short distance from the base of the resort’s Summit quad.  The Rainbow lift would also be shortened under the approved plan, as would the present Red Chair to better accommodate racers.The resort’s existing Sunrise lift would be replaced, supported by a new lodge, parking lot and access road. The resort’s tubing hill would be moved across the parking lot to the “Old Maid” area, no longer bisecting ski trails in the area.

“The skiing experience during windy conditions will be improved by construction of the proposed Eastside pod, the capacities and utilization of the resort will become more balanced with the proposed improvements at the Sunrise and West Village Base areas, user groups and ability levels will be better segregated, outdated resort facilities and infrastructure will be updated, adequate snow coverage in specific high-traffic areas will be maintained, and additional summer recreational opportunities will be provided,” Allen wrote in his Record of Decision regarding Bachelor’s Master Development Plan (MDA).

“The only alternative-driving issue identified through scoping and internal interdisciplinary review was the effect of the proposed lower catchline on areas that meet the criteria for potential wilderness (PWA). Under the Proposed Action, due to bisecting existing PWA polygons with the new
catchline, 447 acres will no longer meet the inventory criteria for potential wilderness equating to 3.3 percent of the PWA in the analysis area and 0.3 percent of the area incorporating adjacent PWA, IRA, and Wilderness,” Allen added.

Plans call for the clearing of roughly a dozen ski trails surrounding the new lift, although Rathbun noted that trail clearing is more akin to forest thinning than anything else, given the widely spaced trees in the area, and it is well sheltered from the mountain’s prevailing northwesterlies. Of particular interest to more advanced skiers, however, the new lift’s base will allow the mountain’s east catch line to be moved 500 feet lower, permitting longer, more sustained fall line skiing beyond the resort’s existing Wanoga Way run and Cow’s Face.

“This terrain is ideal for mid-level skiers,” Rathbun said of the new runs planned around the new lift.  “It’s a little gentler in overall pitch than the terrain on the west side of the mountain.  The growth in the forest is sufficiently spaced that virtually everything within the area will be skiable, including what promises to be some terrific tree-skiing terrain.”

Indeed, it is. I had a chance to sample the proposed new acreage last March and found gently undulating terrain as we bobbed and weaved through the mountain’s signature hemlocks and lodgepoles. Frankly, it was a hoot.

Mt. Bachelor officials have not yet announced a timeline for the planned improvements, although Allen’s Record of Decision speaks to resort plans.

“Implementation is scheduled to begin in the summer of 2013 and be completed within 10 years,” he wrote. “Mt. Bachelor’s MDP breaks this planning horizon into two phases, the short-term (one to four years) and the medium term (four to 10 years). The main short-term priority projects are development of the Eastside pod and associated infrastructure, relocating the tubing hill, and starting development of projects associated with summer activities, including the mountain bike park. Medium-term priorities are base-area improvements at both Sunrise and West Village, snowmaking improvements, and development of the Alpine Training Center and associated facilities.”

Only individuals or organizations that submitted comments during the 45-day comment period on the project’s Environmental Impact Statement, which began on June 1, 2012, may file appeals of Allen’s Record of Decision during the current 45-day appeal period.