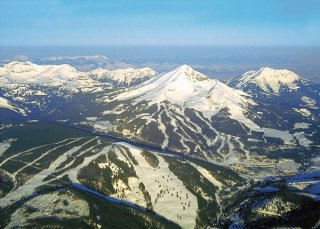 Big Sky, MT – At 5,750 acres, Big Sky was already the largest ski resort in America heading into this summer, when the mountain’s work crews set out to break the 5,800-acre mark in time for this winter.

Extensive glading during the off-season will bring new runs and more fun for intermediates and experts this winter season at Big Sky. The expanded terrain is included on the mountain’s new trail map design, revealing a different aspect of Big Sky’s terrain and the new runs.

The Southern Comfort chairlift, off of Big Sky’s Andesite Mountain, saw the most improvement through glading with two new intermediate runs. The new “Lizette” run is located between the runs Deep South and Sacajawea and the new “Pomp” run is located between Sacajawea and El Dorado. Both new tree shots are named after Sacajawea’s children. A section of the Ponderosa run, also off the Southern Comfort lift, was also widened.

The Mountain Operations crew also upgraded the existing Tango Trees run, below the Lone Peak Triple, through selected thinning and removal of standing dead trees. On the southern exposure of Lone Peak, the crew did careful thinning of select trees on the Dakota Gully run. It will now be regularly groomed, changing its designation to “intermediate” to allow more skiers and riders to utilize Big Sky’s Dakota lift.

In addition to the four new glades, Big Sky’s new trail map now has the majority of the resort’s terrain on a single side of the map, with two additional insets of Lone Peak focusing on the south-facing Shedhorn/Dakota area and Lone Peak’s more technical and advanced duns on its eastern face.

“The most important element of a trail map is to show the trail system in the clearest and simplest way,” explains Jim Niehues, the resort illustrator who designed the new map. “The representation of the slopes, how it skis, the feeling you get from skiing the different terrain…the essence of the mountain. The new trail map image breaks the mountain into three very distinct areas and the transition from one section to the other is easily followed. I am very proud of the new image.”