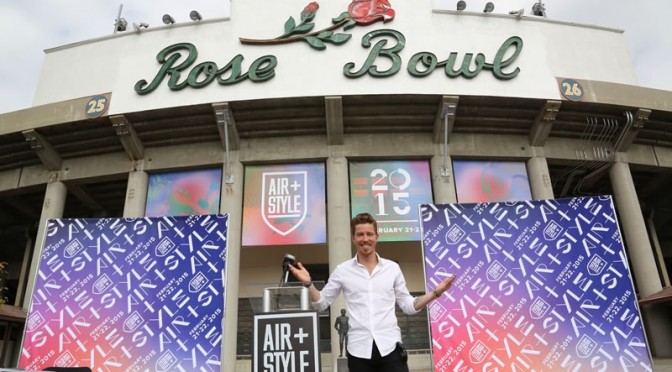 Pasadena, CA – Olympic Champion and snowboarding entrepreneur Shaun White will bring the action packed Air + Style events to the U.S. for the first time at the Rose Bowl Stadium in Pasadena on Saturday, Feb. 21 and Sunday, Feb. 22.

Air + Style, staged by Shaun White Enterprises and hosted by White, originated 21 years ago in Innsbruck, Austria, and a second event in the series was added in Beijing, China, five years ago. White acquired the majority share of Austrian firm Air & Style Company GmbH in January and announced at that time that he would bring the series to the Americas for the first time. The Beijing Air + Style events will be held December 5-6, 2014 and Innsbruck January 16-17, 2015, leading into the final event of the season in the Rose Bowl in Pasadena.

The California edition of Air + Style will feature some of the world’s greatest snowboarders, skiers and skateboarders, as well as live performances of top music acts, an interactive kids area, a fashion show, technology, cuisine, gaming and art reflected throughout the venue.  White will participate in snowboarding and skateboarding exhibitions.

Sixteen snowboarders and 16 skiers representing the best in the world will compete on a 16-story high, 450-foot long ramp and 70-foot jump, all managed by Snow Park Technologies.  Eight snowboarders will be invited and the other eight will qualify from the events in Innsbruck and Beijing, and the Association of Free Skiing Professionals has designated the Pasadena Air + Style event as a “platinum” event, ensuring the top professionals.  Athletes already confirmed to attend include Olympic snowboard slopestyle gold medalist Sage Kotsenburg, Olympic snowboard slopestyle bronze medalist Mark McMorris, Olympic ski slopestyle gold medalist Joss Christensen, and Olympic slopestyle skier Bobby Brown, who has won X Games gold in slopestyle and big air.  McMorris won the Innsbruck Air + Style event in 2011.

“I’m really excited that Air + Style LA keeps getting better,” said White.  “I can’t wait to hear all these incredible acts perform at the Rose Bowl this February!”

White was referring to the first slate of musical performances that has already been announced to fill three stages inside and outside the Rose Bowl.  Kendrick Lamar, Steve Aoki, Diplo, Edward Sharpe and the Magnetic Zeros, Phantogram, Portugal. The Man, Sleigh Bells, The Black Lips, Cults, Surfer Blood, METZ and Bad Things are among the first musical artists to be confirmed to perform.

Tickets for Air + Style are now on sale through all Ticketmaster outlets (www.ticketmaster.com) .  Two-day tickets that gain fans access to both Saturday and Sunday events are priced at $189 for access to floor seating for nightly concerts and $139 for general admission.  VIP tickets will be available through Rose Bowl Premium Seating at (626) 585-6800.