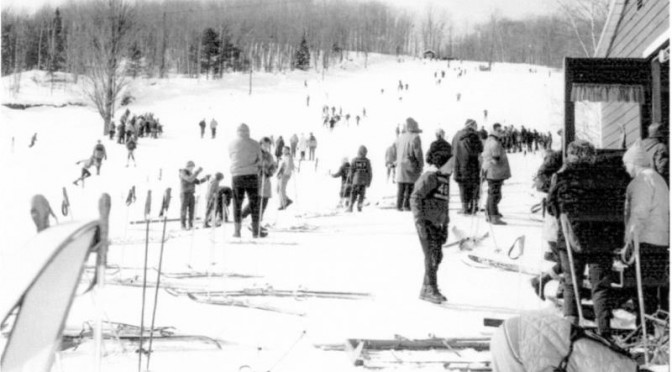 Franconia, NH – The New England Ski Museum has announced that it will fund $3,000 in grants to support individuals and organizations that align with the Museum’s mission to preserve the history of skiing and winter sports under its Cal Conniff Grant program in 2015.

The program is named for former Museum board member Cal Conniff, who organized the first Hannes Schneider Meister Cup Race in 1997 to honor the Austrian ski pioneer who helped establish the mountain resort industry, and to create a measure of financial stability to the non-profit Museum. Conniff was a long-serving executive director of the National Ski Areas Association who became a mainstay of the board of the Museum.

The successful applicants for Cal Conniff awards will be announced on Friday, March 6, 2015 at the opening reception of the Hannes Schneider Meister Cup Race in Cranmore’s Eating House restaurant, in North Conway, N.H.

In 2014, Cal Conniff Grants were made to Mt. Eustis Ski Hill and the Gunstock Mountain Historic Preservation Society. Mt. Eustis Ski Hill, a non-profit group that is bringing life back to the local Mt. Eustis ski area in Littleton, N.H. that closed in the 1970s, at a time when many similar community areas were forced to shut down due to poor snow winters, rising energy prices, and increasing competition from larger areas. In the winter of 1975, as the ski industry press wondered if $12 lift ticket prices were sustainable, hundreds of small areas like Mt. Eustis closed their doors. Some few, like Mt. Eustis, are now coming back to life.

The Gunstock Mountain Historic Preservation Society in Gilford, N.H. is likewise attempting to breathe life back into the Nordic ski jumps at Gunstock which were once a spectacular aspect of skiing in the Lakes Region. The group is hoping to finance a series of jumps that youths will use in progression from 10 meter through 20 and 40 meter to 70 meter.

The Cal Conniff Grant Program is open to individuals, organizations and educational institutions with an interest in winter sports, such as alpine and nordic skiing, snowboarding and snowshoeing. Anyone who can demonstrate the need for funding for the preservation of skiing history, encouraging winter sports participation, or other involvement in snow sports is eligible.

The selection process is conducted by the Museum’s Grant Committee based on the following:

Past projects or people that have received funding through the program have included films such as United We Ski, displays like the Thunderbolt Ski Museum, school Nordic programs, adaptive programs, Olympic skiers,the Damon O’Neal scholarship, and small ski areas like Northeast Slopes and Cochran’s ski area.

The application process is kept purposefully informal. Applicants submit a letter that outlines a description of the project, its goals, the audience that it will impact, and the dollar amount requested. Supporting information for the application should include:

Questions about the program or application materials should be e-mailed to staff@skimuseum.org or mailed to:

The deadline for applications is February 9, 2015.