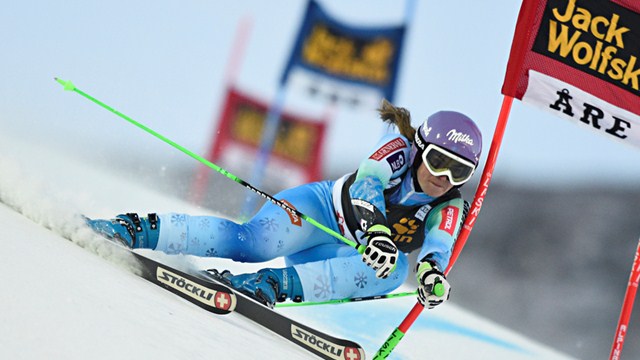 “I am really surprised that I could put such a run together today, coming back from Canada only a few days ago,” Maze said of the tour’s trip back to Europe from Lake Louise, where she won a downhill and placed third in super G. She also won last month’s season opening slalom in Soelden, Austria. “Today I was walking around fast asleep. When you’re jet-lagged, you make some mistakes and you have to take them. I was trying to ski down fast and I made it. Overall I am skiing great so I am really happy with today’s race.”

Mikaela Shiffrin, of Eagle, Colo., skied to tenth in the opening race of the weekend, originally scheduled for snow-starved Courchevel, France. Shiffrin skied a solid first run but not as aggressively as she wanted, going out second and finishing the run in eighth, one spot behind Maze and .78 from the leader Brem in a tightly packed field. In the second run, Shiffrin dropped to tenth while Maze charged up to take the lead and the victory.

“I felt like I attacking a lot harder and I thought that would help my time, but I ended up losing time again,” said Shiffrin of her second run.

For other U.S. women, Julia Mancuso (Squaw Valley, Calif.) just made the flip at 30th, but went out in the second run. Megan McJames (Park City, Utah) missed the top 30.

The men are up next in Åre, with Ted Ligety (Park City, Utah) leading the charge under the lights in a race rescheduled from Val d’Isere, France, also due to a lack of snow in the French Alps. The World Cup women race slalom on Saturday. Next weekend’s race schedule has now been confirmed by FIS, with downhill and super G Dec. 20-21.