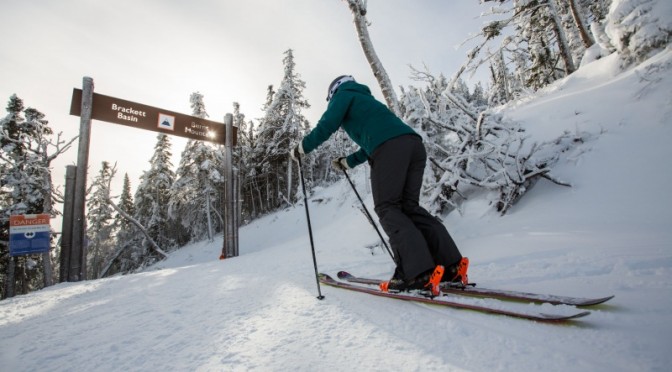 Carrabassett Valley, ME – With over three feet of snow thus far this month, including 30 inches over the past seven days, Sugarloaf is enjoying a dramatic spike in skier visits that this past weekend were nearly double that of the same weekend last season.

Visits to the Maine ski and snowboard resort are also up 52 percent year-to-date over last winter. Still over a week ahead of the popular Christmas vacation period, Sugarloaf officials have opened over 1,000 acres of skiable terrain including Brackett Basin, which today opened on the earliest date since its addition to the trail map in 2010-11.

Sugarloaf officials are calling this the best start to the resort’s season in recent memory. The earliest opening of Brackett Basin prior to this was December 22, 2012.

“This is the best start to a ski season that I can remember,” Sugarloaf Director of Marketing Ethan Austin said. “The abundant snowfall combined with cold early season temperatures have allowed us to open more terrain earlier than ever, including some of our signature natural terrain.”

Part of the new sidecountry skiing development that has been the signature piece of the resort’s “Sugarloaf 2020” development plan, Brackett Basin will feature a newly cut 10-plus acre glade named Slashfire this season, located to the East of Slasher II. The new glade features a steep, maintained pitch with cliffs, rock drops, and other natural features scattered within its boundaries.

Now in its fifth year, the Sugarloaf 2020 Ten-Year Road Map outlines the Sugarloaf’s ten-year vision for development. Since the vision was first unveiled in 2010, the resort has seen numerous upgrades and improvements, including more than 500 acres of new terrain, a new quad chairlift, massive upgrades to its snowmaking system, a new irrigation system for the Sugarloaf Golf Club, new restaurants and food options, and upgraded facilities throughout the resort.