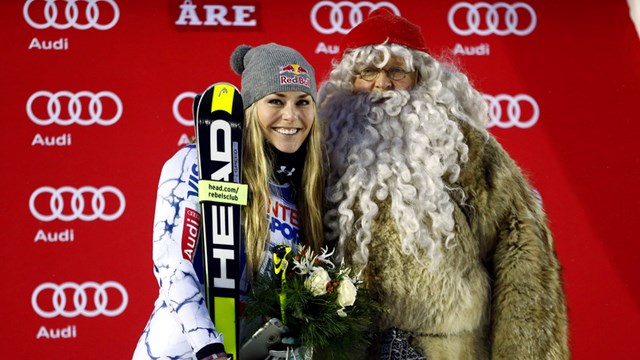 High winds forced race officials to push the start down to the reserve location – eliminating several gates from the course – as well as causing a 15-minute delay.

“I love racing here in Are under the lights,” Vonn said, who won the Are GS in 2012. “This is my second GS win here. It’s just been a great season so far, and congratulations to all the other racers as well – so happy.”

Behind Vonn, Austria’s Eva-Maria Bren was second and Italy’s Federica Brignone rounded out the podium in third at 0.35

“I tried to be smart on the bottom where it was turny and some of the girls had some trouble,” added Vonn. “I think I may have given away too much time there, but still I was attacking the whole time trying to arc and I was fast.”

Mikaela Shiffrin, of Vail, Colo., pulled out of the race with a possible right knee injury sustained during the morning warm up. As a precautionary measure, she has returned to the U.S. to be evaluated further.

“I am flying home tomorrow for a complete evaluation,” Shiffrin posted to Facebook. “I have at least (an) MCL injury and bone bruising, hopefully no additional injury. Full diagnosis and recovery predictions after (I) see a doctor at home.”

In addition to missing the weekend races in Åre, the injury will also force Shiffin to miss the combined scheduled in Val d’Isere, France on Dec. 18. She may also miss the technical races in Lienz, Austria following the Christmas break on Dec. 28-29.

Also knocked out of the weekend races in Åre was Sarah Hector of Sweden, who suffered a knee injury during the first run of Saturday’s race. She will undergo surgery and will miss the rest of the season.

Hector was transported to a hospital in Östersund, where an MRI revealed damaged cartilage on the back of her left patella, which needs to be reconstructed.

“This is a serious injury with a long rehab process and Sara will need to undergo surgery in the next few days,” says the Swedish national team doctor Per Liljeholm. “There is no ligament damage, no bone bruises and nothing indicates that the kneecap (patella) was dislocated, so this was a completely isolated injury.”