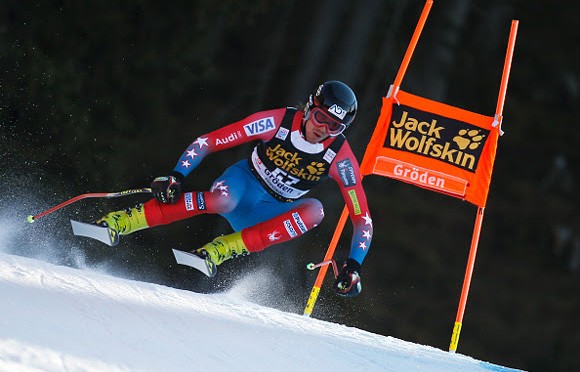 Val Gardena, Italy – The U.S. Ski Team’s Bryce Bennett electrified the crowd with an attack from the back to lead the U.S. men and score a career-best sixth-place finish at Saturday’s Audi FIS Alpine Ski World Cup downhill in Val Gardena.

Long after Norway’s Aksel Lund Svindal won yet another downhill this season, Bennett, wearing bib 57, stepped into the starting gate and looked Svindal-esque as he capitalized on his large six-foot-seven-inch frame to keep his skis on the snow and carry speed through key sections where other skiers were thrown off line and forced to make recoveries.

Crossing the finish line 1.04 seconds back in sixth place, just behind Canada’s Erik Guay, the once hush crowd erupted in cheers as Bennett lifted his goggles in sheer disbelief before letting a well-deserved fist pump fly.

“I’m still surprised. I crossed the finish and saw sixth and I was like, what? No chance! The timer is broken!” an exhilarated Bennett said in the finish. “I just got in the zone somehow. I’ve been working on it, and it clicked a little bit. I just laser beamed the whole course, just focused every section and it was fast.”

Saturday’s victory for Svindal was his fifth in seven World Cup starts this season. Guillermo Fayed of France was second, followed by Norway’s Kjetil Jansrud in third.

For Bennett, finding the maturity to shake off a bad performance in Friday’s super G was the key to how he was able to channel his inner self and come away with a stunning result.

“Yesterday went terribly. I was thinking just sideways thoughts all day, so today I tried to ski a bit more and just read a book and just not really think about skiing,” he said. “When I got in the gate, I just skied. I don’t know what happened.”