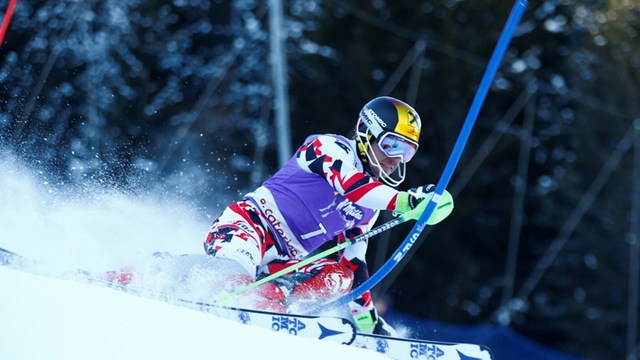 The race was moved from Zagreb, Croatia due to a lack of snow, and there’s something about Austrians and new World Cup venues that just works. Perhaps it’s a sign that the force is strong or it’s something in their training. Whatever the magic “it” is, it has put them at the top of the podium at all of the last three venue debuts on the men’s World Cup slalom circuit.

Hirscher kept that streak alive, adding win number four by beating out slalom points leader Henrik Kristoffersen of Norway and Alexander Khoroshilov of Russia in the first ever men’s World Cup slalom race at the venue.

The victory marked Hirscher’s first slalom win of the season and his 17th career World Cup slalom win, putting him in third place for all-time career slalom wins behind legends Alberto Tomba—who had 35—and Ingemar Stenmark—who had 40.

But  records are “for retired skiers,” Hirscher mused. “Fighting, fighting, fighting. It was very challenging especially physically it was a very hard race for all of us, and you know, if the terrain is more flat, as we have seen today, you have to push it harder and harder. Usually, we are skiing more on the steep part, so there it is the most important thing that you are skiing smooth and technically brilliant, but today you have to push it as hard as you can.”

While the ski forces were strong for the Europeans, North American skiers failed to find their mojo on the slope. Not a single one made the second run flip. David Chodounsky, of Crested Butte, Colo., who has had a solid season so far, was a DNF after getting dangerously in the back seat.

“It was really tough,” he explained. “The hill was really good. Course was great. I felt like I skied well up top. Snow was good and hard, and then it kind of changed in the middle and got a little grippy, and I was just in the backseat at the wrong time, and it caught my skis.”

Head U.S. Men’s Coach Sasha Rearick sees room for improvement for the whole team and opportunity to have some new focuses.

“Today was extremely disappointing,” Rearick said. “It was one of those days where we really have to look at what we’ve done to get ready for today. I mean today was a huge opportunity and an absolutely a missed opportunity.”

But Rearick also put a good spin on the day’s unfortunate results. “But it’s an opportunity as a staff to regroup and say where we’re going to put the focus and energy right now,” he said. “I kind of look forward to these days because it’s an opportunity to really set the tone on where we need to go. We have a big month of slalom ahead of us with not a lot of days of training, so when we do train—for example tomorrow, we’ll train slalom here on this race hill—we’ve got to have our game plan set in stone.”

The men’s World Cup continues with giant slalom in Adelboden, Switzerland on January 9, where Hirscher is the defending winner and Chodounsky looks for redemption. After leaving Adelboden it’s time for the famed Lauberhornrennen January 15-17.