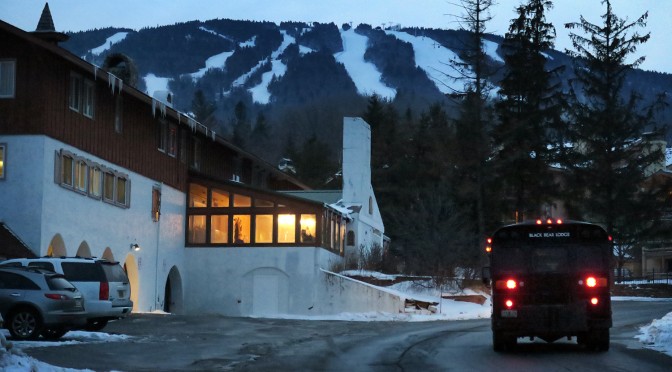 Stratton Mountain, VT – You can swing a cat from the Liftline Lodge and almost hit the base village at Stratton Mountain Resort in southern Vermont, which is appropriate since pets are welcome, though dogs tend to be better travelers.

Frugal travelers have long enjoyed this little gem in the rough, but its future as a haven for cheapskates is up in the air. Although it’s part of the Stratton rental pool, the Liftline was not owned by Stratton until last year and Stratton had no control over its spartan ambiance, which according to Stratton marketing manager Myra Foster is why the Liftline Lodge is what it is.

There are now several plans for the Liftline on the table but nothing definitive has been decided, Foster said.

Because Stratton’s primary market is the affluent from Connecticut, New York and New Jersey, the Liftline is a bit of an enigma, mixed in with swanky accommodations.

Skibum Bob Levitsky and I spent a night at the Liftline this month as part of a daddy/daughter trip that culminated with dropping off the Beckster at her college dorm in Boston. Becky and my collegiate daughter felt right at home since the place attracts a college-aged crowd, and although the rooms have their own private bathroom the Liftline does have a dormitory feel to it. The was no wi-fi in our rooms, which meant my daughter and I fell asleep way earlier than usual.

Skibum Bob is a money-is-no-object kind of guy, but with two daughters in college he is now open to my thrifty ways and discovered the true value of the Liftline when he woke up in the morning and saw ribbons of Stratton’s snowy trails gracing the mountain across the street.  The Liftline is within walking distance of the lifts but we found the free shuttle to be a better option.

While the future may be bleak for us Liftline cheapskates and cat swingers, now is the time for an incredible deal called The One Nighter:  A two-day lift ticket for two people and one night at the Liftline Lodge for $199.

Yes, you read that right. That breaks down to $50 per lift ticket with the lodging thrown in. The rate is based on two adults staying in the same room, plus tax and a service charge. Two adults are required in each reservation for package rates to be in effect and some restrictions — including blackout dates — apply.

For those who want to up their night time ante, the Black Bear Lodge located near the Liftline offers The One Nighter from $238. The Black Bear is another prime-location lodge that was not owned by Stratton until a couple years ago. In its previous life it was known as the Inn at Stratton Mountain. Along with the name change, Stratton remodeled the place but it is still considered a budget-friendly option. And pets are allowed so you can swing a cat there, too.

On Stratton’s web page they explain, “Space is limited and reserved for pets less than 60 lbs. Pets must be on a leash at all times around the resort and crated when left in room. Well behaved pets are welcome. Please note, any guest barking or whining may be asked to leave.”