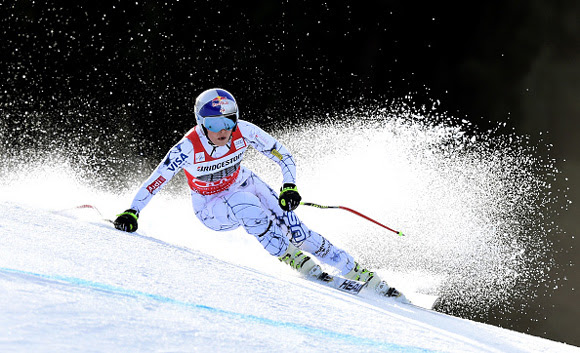 “It was a great day!” Vonn said. “Every day is a new chance to break my own record, which is kind of weird to say, but it still makes it exciting. Every win for me is more special than the last. And my dad is here, so it’s really special.”

Weather and inconsistent course conditions have been a challenge at numerous World Cup stops this season, and this week at Garmisch was no exception. In Thursday’s downhill training run – also won by Vonn – the course was slowed by wet, heavy snow. For Saturday’s race, it was a completely different situation with a hard, fast and bumpy snow surface, thanks to the countless hours the course crew put into preparing the track.

“It was a little bit rough out there,” Ross added. “It was definitely a lot faster than (Thursday’s) training run, completely different snow. It was kind of like a super G day, where you really didn’t know what was going to happen; the line changed in places and it was really bumpy.”

Only two of the first seven racers crossed the finish line, including Wiles, who took the early lead as the next three competitors, including teammate Alice McKennis (New Castle, Colo.) failed to finish. Meanwhile, Vonn was watching the race at the start.

“I could see that there were some problems,” Vonn said. “There were some bumps, and the problem is that the bumps were right in the compressions, and also where there were shadows, so you couldn’t really see anything.

“It was definitely bumpy … and very flat light in some sections,” Vonn continued. “I was able to execute it well in the right places, and carry my speed through the whole course.”