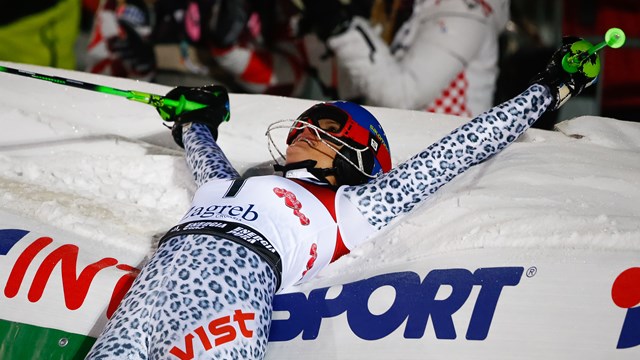 Zagreb, Croatia – Colorado’s Mikaela Shiffrin straddled a gate in tonight’s World Cup night slalom in Zagreb, ending her impressive winning streak in the discipline as the Snow Queen Trophy went to Slovakia’s Veronika Velez Zuzulova, who broke her second-place curse in the Croatian capital despite battling an apparent case of the flu.

After finishing in second for the previous three races, Velez Zuzulova laid down the fastest first run and held the lead in the second for her first victory in the 2016/17 season.

After the first run, an already drained Velez Zuzulova held a 0.39-second lead over Bernadette Schild of Austria. Sarka Strachova of the Czech Republic sat third, at 0.41 back.

“I was very difficult especially because I feel very sick, so it was a really big fight for me. I think I have the flu,” Velez Zuzulova said after the first run.

Velez Zuzulova held off challenges by the charging field in the second run, including her fellow compatriot Petra Vlhova who ultimately finished second, 0.24 seconds from the win.

“It was a really nice moment and especially that I got the crown from Janica [Kostelic]. I think this moment I will never forget because I did spend a lot of time with her. When I was young, I was training with her and she was my big idol. So I am really happy and for sure, it’s even more nice the victory.”

Shiffrin was going for her eighth straight slalom victory in a row, which would have tied the record for most consecutive slalom victories. However, a first run straddle deterred her quest. Shiffrin blamed the mistake on nerves.

“A lot of times I feel like straddling happens almost before you even get on the hill,” said Shiffrin. “It’s a mental thing. And it’s because of nerves, and going out of the gate not totally feeling exactly the way I would like to.”

While disappointed, Shiffrin acknowledged that she wasn’t unhappy the record run was over.

“I was never thinking about the streak in the beginning until people started talking about it,” said Shiffrin. “So to be honest, it’s a bit of a relief because nobody is going to be talking about it anymore…I’m doing this for myself and to try to find peace in my own heart. So I’m on my way there.”

Other notable DNFs among the top seven, in addition to Shiffrin, included Wendy Holdener and Nina Loeseth who also failed to complete the first run.

Resi Stiegler, of Jackson, Wyo., put down two solid runs to grab seventh place for her first Audi FIS Ski World Cup top 10 of the season. After crashing last week in Semmering, Austria, Stiegler was on a mission for a strong finish in Zagreb. After finishing eighth first run, she pulled out all the stops for second run and even with a slight mistake, skied into seventh.

“I was a little nervous coming into this race and I wanted to have a good one,” said Stiegler. “I’ve been trying to get back in the top 10! I love this [Zagreb].”

Next up, the men race the Zagreb night slalom on Thursday, while the women head to Maribor for a tech series over the weekend.