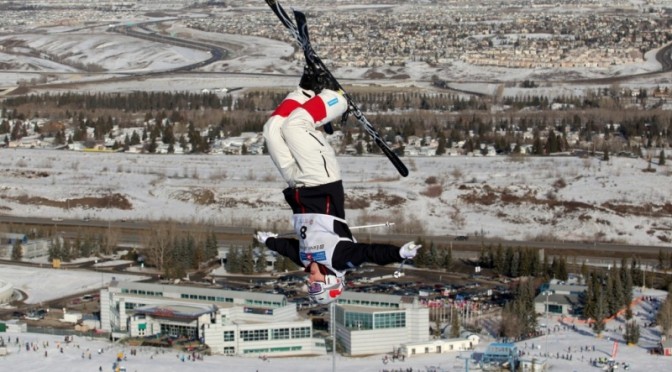 Calgary (AB), Canada – The FIS Freestyle moguls World Cup makes its fourth stop of the tour this weekend in the western Canadian metropolis of Calgary, Alberta. Athletes will compete in a single moguls competition at the Canada Olympic Park on Saturday.

Similar to the World Cup stops at Lake Placid, N.Y. and Deer Valley Resort, Utah, the Olympic legacy lives on on the slopes at the Canada Olympic Park. The Park hosted demonstration events for aerials and ballet skiing at the 1988 Winter Olympic Games. Today, the Park includes a variety of skiing venues, including one of the more challenging mogul courses on the circuit.

“Calgary lands itself on the tougher side as far as courses go,” said K.C. Oakley of Piedmont, Calif., who will be competing on the Calgary course for the fifth time in her career this weekend. “It’s one of the steeper courses on tour – the slope drops off after the top air. For this reason, it can be tough and variable, and is a ski-dominant course.”

The U.S. team has proven that they can ski challenging courses and hold their own in the talented field of skiers on the World Cup this season. Morgan Schild (Pittsford, N.Y.), Keaton McCargo (Telluride, Colo.), Mikaela Matthews (Frisco, Colo.) and Brad Wilson (Butte, Mont.) are all currently ranked in the top 10 in the World Cup standings, with rookie Tess Johnson sitting just outside in 12th. Those athletes, along with Oakley and Troy Murphy (Bethel, Maine) will be looking to build on their recent strong performances with clean, aggressive skiing.

“Calgary, as a course, has always been one of my favorites on tour because it’s steep and technical,” continued Oakely. “Athletes have to be aggressive and forward while skiing to make it down. The venue itself is unique because we’re overlooking the city’s skyline. We’re accustomed to looking out at mountains when we’re skiing – but this view is beautiful in its own way.”

But the strong Canadian squad will be competing on home snow, and will be riding the momentum of their success at the last World Cup moguls stop in Val Saint-Côme, Quebec, where they recorded four medal performances, including the top spot for the men and a clean sweep of the women’s podium. Last winter, they took five of the six podium spots in Calgary. Deux-Montagnes, Quebec native Mikaël Kingsbury sits atop the World Cup moguls standing to wear the yellow bib. On the women’s side, the Canadian Dufour-Lapointe sisters have had great success in Calgary: Justine has scored five podiums, among which two are gold medals, while Chloé has won medals in Calgary these past four years, including gold last year.