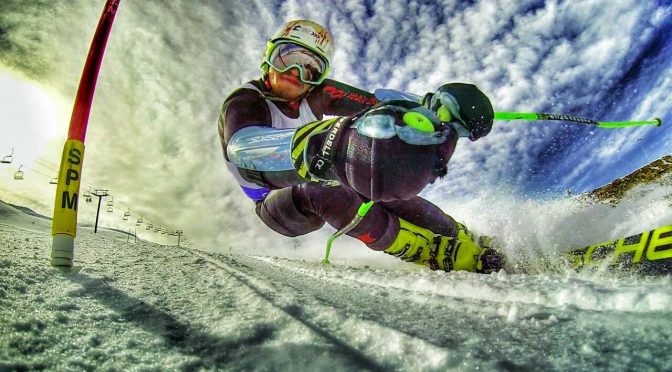 Newry, ME – If you were watching ski racing on television in the 1980s and 1990s, you probably remember a time when there were two separate racing circuits competing for your attention: the World Cup, and the World Pro Ski Tour, where many retired World Cuppers and Olympians headed to compete for their share of a cash purse in the second half of their career.

The pro tour disappeared in 1999 in the hands of new owners. Now, after a 17-year absence, the World Pro Ski Tour is returning to television screens this season. “Our tour was very relevant when it ended in 1999, and we’re confident that this is the right time and the right group to bring the tour back to life. We are thrilled to bring professional skiing model back to the United States. The ski industry is growing rapidly and the success of American ski racers has fueled that growth. We are committed to this enterprise to provide high quality events for skiers and ski racing fans alike,” said Ed Rogers, a Maine resident and both the former and current President of the World Pro Ski Tour. “Our main goal is to stimulate the ski industry by providing young racers an opportunity to experience financial success in order to pursue their dreams.”

The World Pro Ski Tour will make its official return March 10-12 with the Pro Ski Challenge at Sunday River Resort in Maine. The special debut event will feature the professional dual alpine ski race format that the tour previously employed from 1970 to 1999. The field will be filled with Olympic, World Cup, and NCAA competitors such as 2012 National GS Champion Robby Kelley, 2015 Nor-Am Cup Overall Champion Michael Ankeny, and 2016 National GS Champion Kieffer Christianson.

Sunday River will host the race in their Monday Mourning Race Arena on Barker Mountain. The race site provides excellent viewing angles for spectators on snow and foot as it is located just in front of the Barker Lodge with the parking lot close by. The resort’s location is easily accessible from Boston, Portland, New Hampshire, Vermont and Québec. The overwhelming success of the World Cup stop at Killington, Vt. in November, with an estimated 15,000 spectators on hand each day, demonstrates that a hunger for world-class ski racing exists in the Northeast.

“I grew up watching the World Pro Ski Tour along with many of Sunday River’s guests,” says Dana Bullen, Resort President and General Manager at Sunday River. “We are thrilled to host the return of this world-class event and ignite a new tour season to come.”