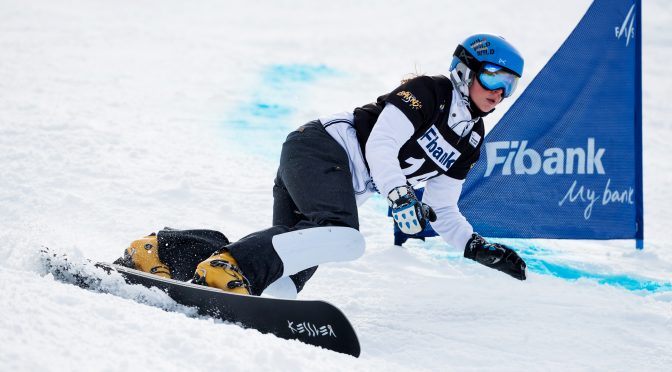 With perfect conditions on the 560-meter course complete with steeps, natural rollers and flats, and a total of 26 gates, Zavarzina repeated her win in Bulgaria the previous weekend against 2014 Olympic champion Patrizia Kummer of Switzerland. With her second win of the season and the fourth of her career, the 2014 Olympic bronze medalist not only extended her lead in the PGS World Cup standings but also overtook the Czech Republic’s Ester Ledecka in the overall alpine snowboard World Cup ranking, as Ledecka missed the Korean race in favor of participating in the FIS Ski World Championships in St. Moritz, Switzerland.

“I’m feeling great. It was a great experience to race here on the official Olympic slope,” said Zavarzina. “I’m really excited to come back next year.”

Switzerland’s Julie Zogg rounded out the podium in third by winning the small final against Germany’s Ramona Hofmeister.

Over in the men’s event, after sneaking into the finals as the 16th qualifier, Prommegger kept the upper hand on his teammate Sebastian Kislinger in an all-Austrian final, bringing home his season’s first World Cup win while Kislinger celebrated his first-ever World Cup podium in his 40th start. Italy’s Aaron March finished in third position with Dario Caviezel of Switzerland forced to settle for fourth.

“I was 16th after the qualification but didn’t know what was going on, Prommegger admitted. “I had two good runs but wasn’t fast. So, I changed the equipment and it worked out perfectly.”

The alpine snowboard World Cup tour continues in two weeks with a parallel slalom staged in Shukolovo, Russia on February 25.