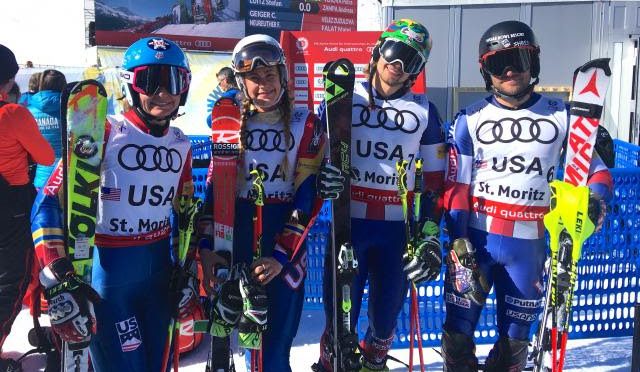 St. Moritz, Switzerland – It was a gorgeous day on Tuesday for the team event at the FIS Alpine World Ski Championships in St. Moritz —a thrilling head-to-head race pitting one country against another. This year, the French team of Tessa Worley, Mathieu Faivre, Alexis Pinturault, Julien Lizeroux, Nastasia Noens and Adeline Baud Mugnier was victorious, taking home the gold medal for their country.

Behind France, Slovakia was second and Sweden third in the event that will be featured for the first time in the Olympic Games in 2018.

The silver medal was the first-ever for Slovakia in a Nations Team Event and while it was a surprise to many, the Slovakian team was very strong and included Veronika Velez Zuzlova, Adam Zampa, Adreas Zampa, Tereza Jancova, Matej Falat and Petra Vlhova.

“I feel like we won the gold today,” said Velez Zuzulova after the race. “We have never won a medal, and I personally have never won a World Championship medal so I’m really happy with how we as a team did today and that we get to stand on the podium.”

Every round produced at least one upset. In the first round, Slovakia set the tone, ousting Germany. In the second round, it was Sweden’s turn to provide the upset as they sent the Austrian team packing. Norway also fell to France in the second round, while the Slovaks continued to cruise, topping Italy.

In the semi-finals, Slovakia edged Switzerland in a tight duel, while the French edged the Swedes to make the finals.

“It was a challenge the whole day,” said France’s Tessa Worley. “We had to fight against Sweden in the semi-finals and also the final was pretty close. We didn’t know this morning what our chances were, so to take away the gold medal is great. We are all very happy.”

The USA squad consisted of six athletes—four racers and two alternates: Resi Stiegler (Jackson, Wyo.), Megan McJames (Park City, Utah), Mark Engel (Truckee, Calif.), AJ Ginnis (Vouliagmeni, Greece), Laurenne Ross (Bend, Ore.) and Michael Ankeny (Deephaven, Minn.). In the first round, Stiegler, McJames, Engel and Ginnis went up against Canada—the team event silver medalists at the 2015 Vail/Beaver Creek World Championships. Stiegler and Ginnis won their races, McJames was beaten by her Canadian opponent and Engel straddled and lost a ski at the top of the course, which led the two teams to tie. But a tiebreaker—which looks at the matchups between the fastest man and woman races—meant Canada took the first-round win by .01 seconds.

Stiegler was still bubbly after the race and is excited about getting the tech week started. “It’s awesome to be with the team and get the World Championships going for us,” she said. “We’re just getting the cobwebs out, the race vibes going. I’m bummed that we didn’t make it, but that’s ski racing and we’re going to come back out and do better in the other events.”

Ginnis, who was competing in his first World Championships, echoed Stiegler’s sentiments. “It’s a really fun event,” he said. “The atmosphere—the fact that you get to race with girls and guys and it’s a team effort is really cool. It doesn’t matter if two of them go out, you gotta put the pedal to the metal and get two fast runs!”

Next up, the tech skiers are in action in St. Moritz, with the women’s giant slalom taking place on Thursday and the men’s GS on Friday.