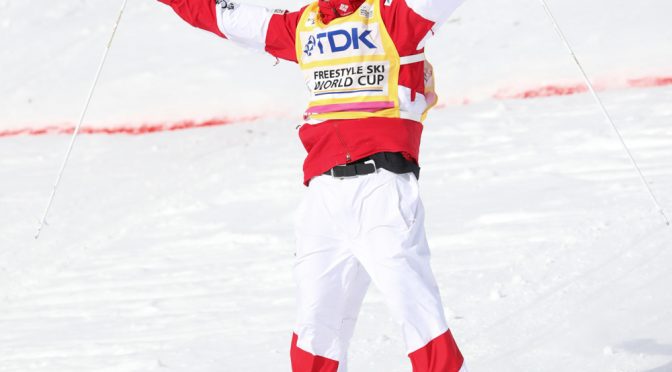 In the men’s competition, Kingsbury came out on top with a score of 89.99, one of the highest earned by any moguls skier in any stage this season. His teammate Philippe Marquis was second and France’s Benjamin Cavet third.

With this 39th victory, Kingsbury not only is assured his sixth consecutive Crystal Globe, but he also breaks Eric Laboureix’ record for the most victories overall in freestyle skiing on the FIS World Cup circuit. The skier from Deux-Montagnes, Quebec was happy with his strategy on Saturday, which earned him his sixth victory of the season.

“The moguls were not easy today but it kept get getting better with every run,” Kingsbury said. “I followed the plan and did a cork 1080 on the top air and a cork 720 on the bottom. It was the first time that I did it this way in single moguls competition and it earned me a better air score. I think that I will do the same again in the future.”

“I had a great day today,” said Marquis, the silver medalist. “It feels great to win a second medal in a row after my silver at Pyeongchang last week, where I also skied very well, but it feels even better to know that we have made the right decisions. The snow was really sticky today; we had to be strategic and it paid off!”

Montana’s Brad Wilson, who won the men’s competition in Tazawako last season, skied strong and qualified high throughout the day to advance to the super final and finish fourth, for the best result for U.S. men.

“I felt like I consistently skied some good runs today,” said Wilson. “I left it all out there in my super final run, it just wasn’t quite enough to get on the podium.”

Wilson skied some of the fastest times of the day, including the fastest super final time, 22.21 seconds, in his fourth place run.

“Speed is always one of Brad’s strengths,” stated U.S. head moguls coach Matt Gnoza. “He skied three really solid runs today, and it came down to some of the other guys having a higher degree of difficulty on their jumps.”

On the women’s side, Aussie Britt Cox took home yet another win, with France’s Perinne Laffont landing her second podium finish of the season in second and Canada’s Andi Naude in third, repeating her result last week in South Korea. .

Through the qualifications and the first finals round of the ladies competition it looked like Laffont was primed for a repeat performance on the slope where she earned her first World Cup victory last season.

However, come time for the big final, Cox had other plans. While Laffont was able to score the highest turning scores of anyone in the big final, Cox’s faster time and better jumping gave her the edge, but only by the slimmest of margins. When it was all said and done, less than half a point separated the two skiers – Cox winning with a score of 78.57 to Laffont’s 78.36.

The win was Cox’s sixth of the season, giving her seven podiums in eight events and a 234-point lead over Laffont on the World Cup leaderboard. Also worth noting is that Cox’s podium was the 24th for the Australian team across the Freestyle and Snowboard disciplines, marking a new season best for the nation.

After strong results in the qualifying rounds and advancing four skiers to the final, none of the U.S. women were able to break through to the super finals. Keaton McCargo (Telluride, Colo.) was the top finisher in seventh. Olivia Giaccio (Redding, Conn.), Mikaela Matthews (Frisco, Colo.) and Tess Johnson (Vail, Colo.) joined her in the finals, finishing 10th, 11th and 15th respectively.

“The women skied really well in qualifications,” continued Gnoza. “Olivia qualified third going into the finals which, as a World Cup rookie, was a big step for her. We just didn’t see the performance we needed in finals, so we’re hitting the reset button.”