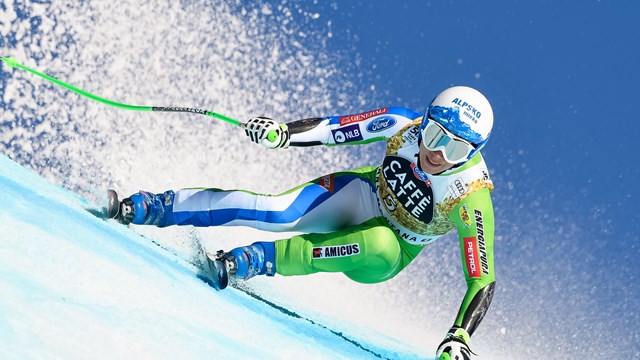 “The set was a bit turnier [than Friday] I would say,” Stuhec noted. “The speed was lower, so I guess they tried to make it a bit safer. But there were still some key points where you had to do what you had to do to maintain the speed and to carry it all the way down. I guess I did that pretty well.”

“It’s still warm, so it’s a little bit soft, but there was a solid base and surface,” said Shiffrin. “Definitely when I went number two the surface was smooth and fine. I just didn’t quite handle the peely snow as well as I could have, and I was a bit conservative in sections that I didn’t want to be. But I’m happy to get a run in on this hill.”

Vail’s Lindsey Vonn and Laurenne Ross, of Bend, Ore., weren’t quite as fortunate on Saturday. Ross went wide on a right-footer, taking out a gate panel, while Vonn slipped out in the soft snow just a few seconds into her run, crashing through a course banner and into the B-net. However, both athletes were able to ski down the mountain.

“I’m pretty bummed with my result,” Wiles said. “I think I left a lot out there today. I had great training coming in, a good warm up this morning and I was in the right mindset to really attack and have a good day, but I don’t know what went wrong.”