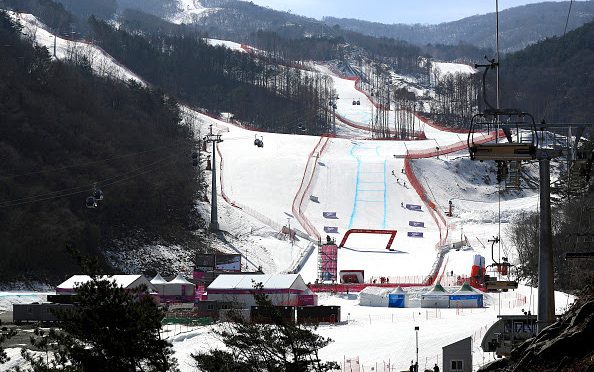 PyeongChang, South Korea – The U.S. women’s speed team will look to put a rough Audi FIS Ski World Cup weekend in Crans-Montana, Switzerland behind them as they take on the Olympic test event at the Jeongseon Alpine Centre this weekend with a downhill on Saturday and super G on Sunday. Meanwhile, the World Cup men head to Kranjska Gora, Slovenia for a tech series.

South Korea wouldn’t be the first place you’d expect for an Audi FIS Ski World Cup venue, but nestled into one of the most remote areas of South Korea in the Gariwang mountains surrounded by a 500-year-old sacred forest, the temps are cold and the snow surface is hard. That, combined with the handiwork of man, myth and legend – Wyoming’s cattle rancher-turned-snow-master Tom Johnston – provides for some sweet conditions.

Johnston, Chief of Race for the 2018 Winter Olympic Games, is the man behind the top-notch surface for the event, and earned the role after having crafted the surface at Beaver Creek, Colo. for the World Championships and as a mainstay for the annual World Cup stop. Add to that the 2002 Salt Lake City Games and 2014 Sochi Games, and you’ll quickly understand why the man is a legend…and why the Jeongseon surface is prepped to perfection.

The American Downhiller men had the first chance to check out the new track last year, and their first impressions were favorable across the board. It was certainly a successful weekend for Utah’s Steven Nyman, who grabbed third place in the first 2018 Olympic test event. There are some familiar faces from the American Downhiller crew in the mix this weekend, too, with Travis Ganong, of Squaw Valley, Calif., and Lake Placid, N.Y.’s Andrew Weibrecht forerunning.

And, by the looks of it, the American women are liking the track just as much – if not more. Lindsey Vonn is the clear favorite after throwing down the fastest time in both training runs leading into the weekend. She bested the Slovenian speed powerhouse Ilka Stuhec and Italy’s feisty Sofia Goggia, who went second and third both days, though disqualified for missing gates.

“The track is really has long, sweeping turns and good tactical sections, and it’s all about carrying your speed from top to bottom,” said Vonn after the second and final downhill training run. “When I first inspected yesterday, I knew I was going to like this track, and I think my training runs so far have been good, but not great. So, I’m surprised that I’m fast, but I think that just bodes well for the weekend and also for next year for the Olympics.”

The American women have also had the chance to do some cultural exploration off the hill, with a visit to the nearby Woljeongsa Temple, founded in 643 by the Silla monk Jajang. Ross and her teammates are soaking it in and enjoying the exploration. “It’s a totally different culture and I’m enjoying every minute of it,” said Ross.

Mikaela Shiffrin, who will not compete this weekend as she has shifted her focus to the upcoming tech series at Squaw Valley, carries a 298-point lead over Stuhec into the weekend. There are presently four speed and four technical events this season remaining on the World Cup schedule. Shiffrin will seek to solidify her lead when the tour comes to Squaw Valley for a giant slalom and slalom. She holds a 145-point lead in slalom and could clinch that title in Squaw Valley. The Audi FIS Ski World Cup crystal globes will be awarded at the World Cup Finals in Aspen, Colo.