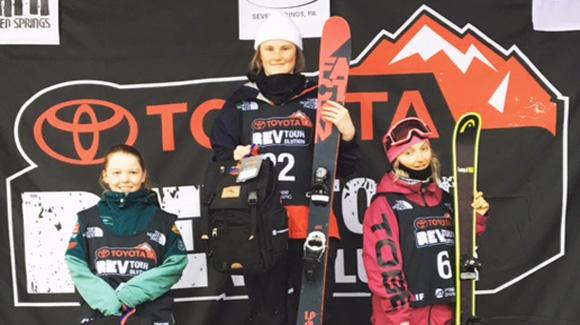 Wednesday’s event also served as the final stop of the FIS NorAm Cup Tour. Ethan Swadburg, of Dillon, Colo. was third in the NorAm Cup overall standings. Phillippe Langevin of Canada was first overall and his countryman Patrick Dew in second. The Canadian women swept the overall standings: Sofia Tcherntsky taking the top spot, Emma Stevens was second and Megan Cressey was third.

Claire dominated the Rev Tour this season, taking three victories and a second in four slopestyle competitions. She also took a podium at her first World Cup event this season – third place at Seiser Alm, Italy in January.

Sofia Tchernetsky of Canada was second and Constance Brogden of Great Britain was third on Tuesday. Emma Stevens of Canada joined Claire and Rubocki on the podium in third on Wednesday.

For the men, Canada’s Antoine Poirier took the win on Tuesday. The Canadians swept the podium on Wednesday: Philippe Langevin was first, Max Moffatt was second and Patrick Dew was third.