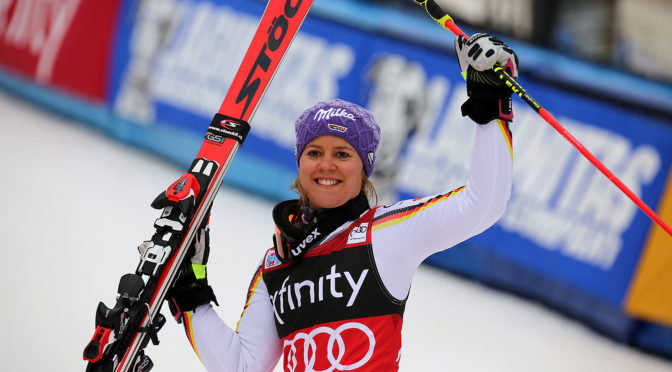 “This is definitely a step in the right direction after Soelden,” said Shiffrin, who finished fifth at the season-opening giant slalom last month in Austria. “I felt a lot more confident with my skiing today and I’m excited to keep that going. It was a sweet race today, it was really fun to ski.”

In front of a record-breaking crowd of more than 18,000 screaming fans at Killington – which eclipsed the previous record of 16,000 set last year at Killington – Shiffrin drilled her first run, leaving just a 0.26-second margin to first-run leader Rebensburg, winner of the season-opener in Soelden.

With a thundering crowd, overcast skies and light precipitation moving in for the second run, Shiffrin took a few risks to maintain her podium position.

“I felt like I had a couple little bobbles where I felt myself losing time,” she said. “But I also took a little bit of extra risk where I may have gained some time. It wasn’t like one of my flawless training runs where I felt like: ‘Oh my gosh it’s the fastest that course could be skied.’ But it was definitely one of my best race runs.”

With her second-place finish, Shiffrin maintained her overall World Cup lead by five points over Rebensburg heading into Sunday’s slalom, the second run of which will be broadcast LIVE on NBC at 1:00 p.m. EST.

“The mentality I had today is the same mentality I need to have tomorrow in order to bring out some of my better skiing,” Shiffrin said heading into Sunday’s slalom. “It’s a new day, a new race and new competition. And I’m excited to go for it!”