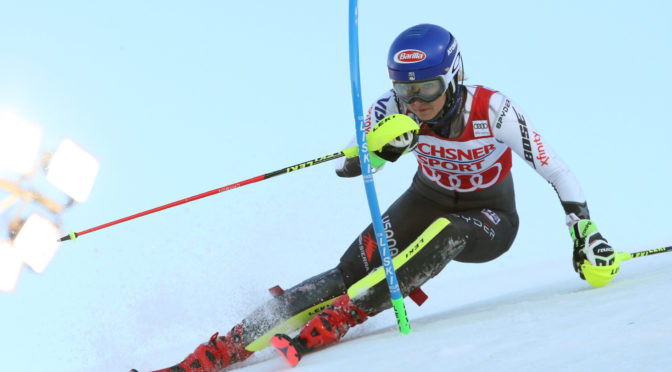 Levi, Finland – Colorado’s Mikaela Shiffrin opened her quest for her sixth career FIS Ski World Cup slalom crystal globe with another dominating victory in the season-opening slalom under the lights in Levi, Finland on Saturday.

“I felt good, I was even surprised at how good the course felt with the warm conditions,” said Shiffrin, who now has 44 career World Cup victories, including three slalom wins in Levi—which equals Germany Maria Höfl-Riesch’s record win count on the Levi Black slope. “I had a little bit of a scary moment on the pitch, but I fought through it and it was fun!”

The start of the first run was delayed an hour and moved further down the mountain due to windy conditions. Due to the wind, the gondola was also inoperable, so athletes were shuttled on buses to the start for inspection. But despite the warm temperatures, the course remained hard and fast. Shiffrin started first in the opening run and never looked back, taking a 0.14 second lead over Sweden’s Friday Hansdotter, who eventually settled for fourth.

Slovakia’s Petra Vhlova skied a solid second run to finish second, 0.58 seconds back of Shiffrin’s winning time, and Austria’s Bernadette Schild was third, 0.79 seconds back. Resi Stiegler (Jackson Hole, Wyo.), who was racing for the first time since sustaining a knee injury at the Olympic slalom in PyeongChang, and Nina O’Brien (Denver, Colo.), also started for the U.S. but did not qualify for the second run.

Shiffrin’s reindeer herd also expanded with her third slalom victory in Levi. She named her newest addition Mr. Gru (from the movie Despicable Me). Mr. Gru joins Sven, won in 2016, and Rudolph the Red-Nosed Reindeer won in 2013.

The women’s World Cup circuit moves on to Vermont’s Killington Resort for the Killington Cup, Nov. 24-25 with giant slalom and slalom events. Shiffrin has won the slalom the past two years at Killington and finished fifth in the giant slalom in 2016, and second in 2017.