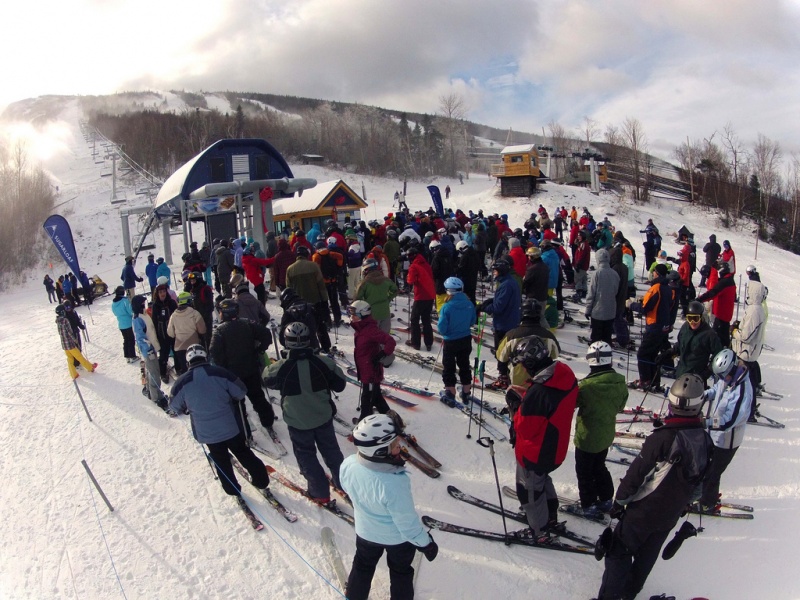 Carrabassett Valley, ME – With snow guns blasting and crowds cheering, Stephen Kircher, Boyne Resorts’ President of Eastern Operations, cut the ribbon on Sugarloaf’s newest chairlift, the Skyline Quad, at noon on Saturday. The new lift was installed over the summer at a cost of roughly $3 million as a replacement for the Spillway East chair that derailed last December, injuring a number of riders.

Kircher was joined in the ribbon cutting ceremony by Sugarloaf General Manager John Diller, Director of the Maine Office of Tourism Carolann Ouellette, Ski Maine Association Director Greg Sweetser, and hundreds of Sugarloafers who turned out to mark the occasion.

The first four seats on chair #1 of the new quad were occupied by Mainers Meredith Strang Burgess of Cumberland, Doug Stewart of Cumberland, Chris Proulx of Carrabassett Valley, and Chad Coleman of Kingfield. The four were winners of four separate auctions held over the summer to benefit four different local non-profit organizations: the Sugarloaf Charity Summit, the Western Maine Center for Children, the Sugarloaf Ski Club, and Carrabassett Valley Academy.

The first 100 people to ride the lift also received a commemorative t-shirt to mark the occasion.

“This is truly a great day for Sugarloaf,” Diller said. “This new lift will be a huge benefit for skiers here at Sugarloaf, and it shows the commitment of Sugarloaf and Boyne Resorts to the ten-year plan we laid out two years ago. We couldn’t be happier.”

Sugarloaf officials and parent company Boyne Resorts already planned to replace the lift as part of the resort’s master plan, dubbed Sugarloaf 2020, when last December’s accident occurred. Kircher told the gathered crowd that the new lift is a “milestone” that “will transform the center of the mountain at Sugarloaf.”

“I congratulate Sugarloaf as they move forward with their 2020 plan,” said Carolann Ouellette, Director of the Maine Office of Tourism. “Their vision, investment and commitment keeps Maine competitive with winter destinations around the world. Sugarloaf offers some of the best skiing on the East Coast and as much vertical drop as many western resorts. With their new modern equipment, dependable snowmaking, expanded terrain and a full range of guest services and amenities, Sugarloaf offers an exceptional ski and snowboard experience for Maine’s residents and winter visitors.”

The new quad features a conveyor loading system, which will improve the lift loading experience, reduce lift stoppage time, and allow the lift to run at speeds of up to 500 feet per minute, making it the fastest fixed-grip lift on the market. The new lift travels 3,746 feet, rises 1,457 vertical feet, features a total of 16 towers, and is powered by a 400 horsepower motor. An additional 400 horsepower Cummins Diesel engine serves as a backup.

Skyline was designed to be as wind-resistant as possible, with shorter towers, heavier chairs, and several hundred feet of wind-fencing.

Skyline replaces not only the Spillway East chairlift, but also Spillway West, both of which were removed at the end of the 2010-11 season.

The presence of this new, high-capacity quad is expected to rebalance the flow of uphill traffic on the mountain, thus reducing pressure on other lifts and decreasing lift lines across the mountain during peak times.