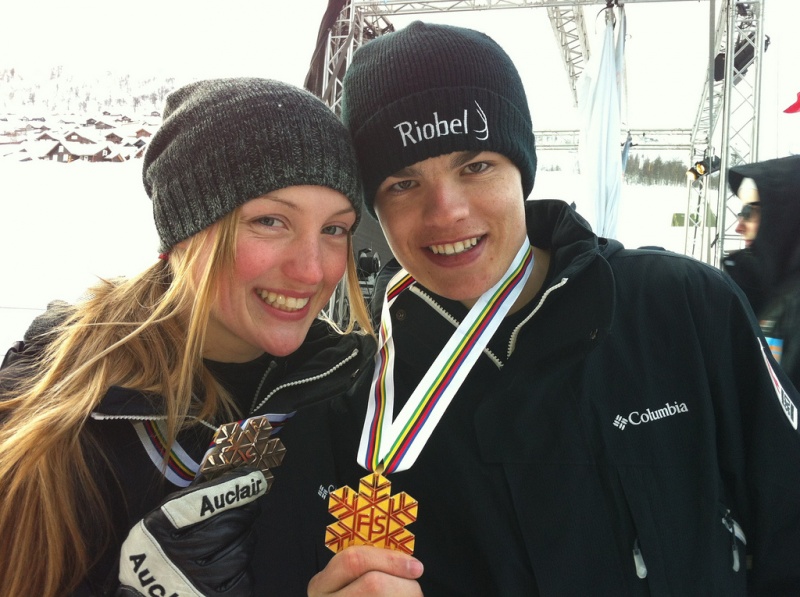 “In this sport you have to be on top of your game all the time or your career isn’t going to be successful. There are always new athletes coming up the line and new tricks to perfect it’s a constant game, and it’s a pressure that I put on myself,” said Kearney, who missed the first several competitions of this World Cup season due to a training injury sustained this fall. “I have to say that my injury this season definitely helped me keep my focus. When I was watching my competitors train and compete it only pushed me to not be complacent and to never take my health for granted. It became my epic challenge to battle back and fight for that yellow bib.”

In front of a crowd of thousands, Kearney stayed atop the leader board through each round with the fastest times, cleanest turns and biggest air to become only the third woman in history to earn two World Championship moguls titles, after Candice Gilg of France (1995, 1997) and Kari Traa of Norway (2001, 2003).

Firm snow allowed for fast skiing from all athletes. Kearney threw a back lay on the top air and a 360 mute grab on the bottom and maxed out her speed points with a score of 7.5 in her final run.

“I put the pressure on myself today to elevate my skiing to where the competition was. That’s what I have to do at every event in order to be successful,” Kearney explained.  “Whether it’s a World Cup, World Champs or the Olympics. Moguls is a difficult sport and often inconsistent so to be able to say I won this event eight years ago is a testament to the consistency of my skiing. That’s something I’m extremely proud of.”

Japan’s Miki Ito took the silver medal for the women, with 18-year-old Justine Dufour-Lapointe of Montreal, Canada finishing with the bronze World Championship medal. Bozeman, Mont.’s Heather McPhie, who qualified second, ended the competition off the podium in fourth. Deciding to go big and throw a full on her top air, McPhie had a deviation in her line upon landing which put her into fourth.

After qualifying first in Tuesday’s eliminations and first again in the final, Kingsbury threw down a huge super final run that included a double twisting back flip off the top jump and a cork 1080, or triple twisting off-axis trick, off the second to take the title with a score of 27.59.

For the 20-year-old from Deux-Montagnes, Quebec, it was the culmination of a lifelong dream.

“I have been waiting a while for this and dreaming about the day that I would earn the World Championship title. I worked hard all summer to get to this day and I’m very happy,” Kingsbury said, adding, “When I woke up this morning I was in a World Championship mood. I felt perfect. My body was perfect, so I knew it could be today.”

A bonus for Kingsbury was the fact that his parents made the trip to Norway to see him compete. “For sure it’s extra special that they’re here. Actually, I have no words for the whole experience right now, it’s going to have to sink in.”

Kingsbury’s teammate Alex Bilodeau, of Rosemere, Quebec, finished the day with silver and 2009 World Champion, Patrick Deneen of Cle Elum, Wash., earning the bronze medal with a D7 on top air and a huge back X on bottom.

“Today was a great day for the moguls team,” said a proud U.S. coach, Scott Rawles. “We qualified all eight of our athletes from yesterday for the finals today. Hannah came out and performed at an exceptionally high level even for her today. Her runs  were fast and dynamic and she nailed both of her jumps on both runs. Quite an accomplishment to be World Champion again after her last title in 2005.

“Patrick Deneen skied the fastest run in the final and had an excellent result in third place. Heather McPhie threw a back full and a D-Spin in one run which is the highest degree of difficulty ever performed at World Championships in moguls. She had a couple of difficulties on her exit out of the top air but I couldn’t be prouder that she threw everything she had out there,” Rawles continued. “We are right back at it tomorrow morning for dual mogul qualifying and I think the whole team and staff are looking forward to the event on Friday.”

Dual moguls will kick off Friday in Voss.